February 2017 was short, but it was a challenging month for President Buhari. The president kept falling in and out of illness such that Vice President Osinbajo had to become acting president. President Buhari wasn’t the only one who had issues in this month. Actress Tonto Dikeh got separated from her husband and a lot of dirty linen was spread in public.

Award winning musician, 2 Baba who planned to hold a protest against the Federal government sadly pulled out at the last minute for reasons best known to him. Also in America, Trump “wahala” kept brewing this month. scroll down to read stories in full.

Popular and talented musician Tiwa Savage celebrated her birthday in February. The pop diva had a party at the tunnel night club, London and her husband Teebillz was nowhere to be found neither did he drop any message on social media to wish her a happy celebration. This happened at a time when fans thought the couple were moving towards reconciliation. It was also said that Tee Billz was undergoing mental health therapy and rehabilitation at the time. 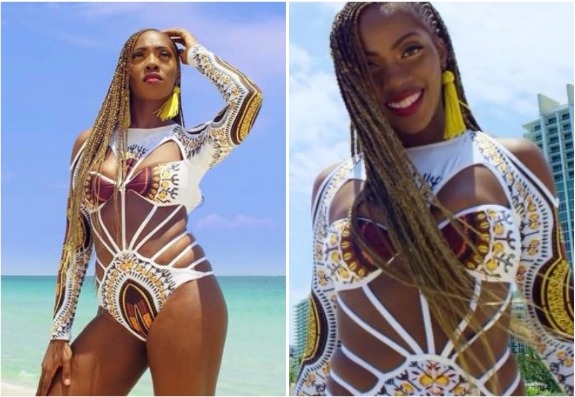 Ace musician, 2Face who planned a nationwide protest tagged the #onevoice protest, scheduled it to hold on the 6th of February 2017. Various music stars such has Burnaboy, Davido, Alibaba and Ruggedman supported him. But 24 hours to the protest against the federal Government, 2face who seemed to have been threatned by unknown people backed out of the protest. He cancelled the protest  on claims of serious threats on lives. He said that the protest wasn’t worth anyone’s life.

Blackface who has an old beef with 2face renewed it by blasting him over the planned nationwide protest against the federal Government. He said that the Buhari administration was doing fine and 2face needed to be educated as he was an illiterate. Ruggedman later blasted and criticised Blackface for his statements and behavior towards 2face and the protest.

YEMI ALADE WAS NOT SEEN AT THE GRAMMYS

Musician and fashion icon Yemi Alade who claimed to have gotten an invite to the Grammy awards in Los Angeles was nowhere to be found at the event. It was obvious that she was absent at the event.

Toke Makinwa revealed on twitter that she remembers the month of February a lot because, February 2016 was not a good time for her as her marriage was under fire and it eventually crashed. A lot of fans consoled her on the tweet.

Fake big broither Naija housemates, Jon and Ese were evicted from the reality t.v show on the 26th of February after Biggie had nullified the weekly nomination votes. However  viewers had predicted that Biggie nullified the votes beause the 2 fake housemates got the highest nominations but were supposed to be up for eviction.

DONALD TRUMP BANNED REFUGEES AND MUSLIMS FROM COMING INTO THE COUNTRY

Donald Trump, the 45th president of the U.S.A signed an executive order halting all refugee admissions and temporarily banned people from seven muslim countries from coming  into America. However on the first of February, Donald McGalin the legal counsel to the president then issued a memo saying the travel ban did not apply to lawful permanent residents of the United states.

BOBRISKY ANNOUNCED WANTING SOMETHING SERIOUS WITH HIS ‘BAE’, ALSO ACCUSED OF HAVING A RELATIONSHIP WITH CHURCHILL.

Apparently Bobrisky isn’t clearly sure of his sexuality. He has denied being gay severally in interviews, but his mystery bae is a married man.

Also in February, Tonto Dikeh’s estranged husband Churchill was said to be dating Bobrisky. Nollywood actor, Uche Maduagwu, bared the claims in a post which he later deleted, alleging that Churchill had a relationship with Bobrisky and Swanky Jerry (Jeremiah Ogbodo), Tonto’s fashion stylist ‘rumoured to be gay.’

But the father of one said, “Truly, I did not see it posted because I’m not a social media person, but got wind of it later.“It sincerely beats my imagination to think of such relationship.I do not know Bobrisky and I met Swanky Jerry through my wife.”

Miyonse took the bold step and “Finally” got down with her, by feeling her pierced succulent boobs on Live TV.

President Donald Trump set in motion his plan to build an ‘impenetrable, physical, tall, powerful, beautiful and southern border wall between the U.SA and Mexico. The border wall was proposed to be about 1900miles, 3,100km long. Not only did the public find the idea of a border wall ridiculous but the fact that president Trump further insisted that the Mexican government pay for the expenses of the wall.

Nollywood actress, Tonto Dikeh, confirmed that she has separated from her husband, Oladunni Churchill. She revealed  on Instagram while responding to questions from her fans.

Tonto also said she  blocked her husband from accessing their son since they went their seperate ways, but that he can see him when he wants, as he had the contacts of his nanny and part-time help. She said this “When a woman leaves her husband, she takes her child because absolutely nothing else matters to her but the child.

This is what I did and I happily give all access for his father to see him. Now my question to you is that did your source also tell you that he has never called for once to Ask how his son is doing? I will admit, I personally blocked his access to me for the sake of my emotional stability,” she said.

The actress urged her fans to pray for her while respecting her privacy.

ThinTallTony, Marvis and Gifty had been nominated for eviction but the fair-complexioned housemate was sent packing on Sunday during the weekly eviction show.

Gifty had been nominated for two straight weeks but survived the eviction process earlier.

Before the eviction show began, host Ebuka Obi-Uchendu had invited the housemates to play a game of ‘High Stakes’ on the stage.

The three nominated housemates, fake housemates and Bally (because of his green advantage card) were not included in the game.

TBoss, who lost the game, was expected to wash dishes used by housemates.

Bisola who won the game, managed to secure immunity from nomination the following week.

Earlier, during the diary session with Big Brother, Gifty had said she was comfortable in the house and didn’t want to leave.

Actor, Seun Egbegbe whose real name is Olajide Oluwaseun Kareem, along with one Ayomide, were arraigned before the court by the police in February on a 36 count-charge of conspiracy and fraud.

A Federal High Court judge in Lagos  refused to hear the bail application of the Nollywood film marketer, Seun Egbegbe, and his co-accused, Oyekan Ayomide, who were alleged to have defrauded some Bureau De Change (BDC) operators of millions of naira.

Ese told her fellow housemate that she had a dream about ThinTallTony being married with two kids.

After narrating her dream, a not-so-worried Bisola said, “I get the drift.” She further explained that whatever happenes during their stay in the house, doesn’t go beyond the house.

TTT who was romantically involved with Bisola, failed to mention his marital status to her. During one of their conversations, he described himself as ‘single by God’s grace.’

Despite the backlash that  followed TTT’s sexual escapades in the house, his wife and mother were still in support of him, and were still campaigning for him.

In the absence of President Muhammadu Buhari, Pastor Osinbajo the vice president became the acting president , presiding over matters. He held a meeting with the Executive Council of the Federation and ministers and they were forced to deliberate for seven hours.

The meeting was regarded as the longest meeting ever under the administration and a lot of people began to give kudos to the vice president.

Also on Monday  13th of February, 2017, while in Rivers State, Vice President Osinbajo declared that the federal government would work with illegal refineries and help convert them to modular refineries.

The protracted absence on medical grounds of Nigeria’s President Muhammadu Buhari stoked fears of a full-blown political crisis at the heart of Africa’s most populous nation, Nigeria in February.

The 74-year-old former army general left Abuja for London on January 19, leaving Vice-President Yemi Osinbajo in charge while he took time off.

But on the eve of his return earlier in February, it was announced that he was prolonging his stay outside the country to enable him to collect the results of unspecified medical tests.

Speculation, inevitably, went into over-drive that he may no longer be fit for the top job, and despite multiple claims he is well, the government struggled to seize back the initiative.