JAPANESE FEMALE POLITICIAN TOOK HER BABY TO WORK, BUT THE PATRIARCHY WAS NOT PLEASED 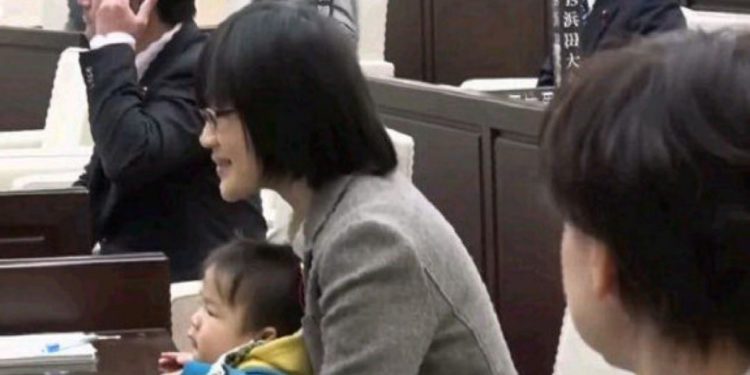 Yuka Ogata, a female politician wanted to make a point about the challenges working women face in Japan. The 42-year-old assembly member, on her first day back at work after giving birth, walked into the chamber and sat in her front row seat with her 7-month-old baby, Dogen, in her arms. Video from the assembly session showed the boy sitting on her lap and watching the goings-on, not making a sound, while the men in the other rows looked on in consternation.

Ogata had hardly even sat down before four men, including chairman Yoshitomo Sawada, immediately confronted her about bringing the baby into the chamber. A fifth man lingered behind them.
Yuki Ogata explained,
“I wanted to appear in the assembly hall with my baby and represent the voices of mothers, working and nonworking, who tell me they’re struggling to raise a child in Japan,”
Ogata has a master’s degree in conflict resolution from George Mason University and also has a 4-year-old daughter.
According to her, “Women want to be able to raise a child and work happily, without having to sacrifice one of these things.”

Other politicians around the world have made their point in similar ways.

Licia Ronzulli, the Italian member of the European Parliament, has been taking her daughter, Vittoria, into the chamber in the Strasbourg since 2010, when she was 1-month- old.

Earlier this year, Larissa Waters became the first member of Australia’s parliament to use new rules allowing mothers to nurse their babies in the chamber.
But Ogata’s move set up a serious confrontation in Japan, where rules are rules and must not be bent.

Ogata, who was elected to the assembly in April 2015, had already made history and waves in March when she remained seated while asking questions in the assembly. She was eight months pregnant at the time.

Babies are not explicitly banned from the assembly chamber, and Ogata said she had earlier asked the assembly secretariat to allow members to bring their children onto the floor or open a day-care center in the assembly building.

But her request was denied she was told that attending a meeting with a child would “obstruct the operation of the assembly” so she decided to take her baby with her when she returned to work anyway. Still, she was surprised to have her baby ejected from the chamber.

The chairman was not impressed with Ogata’s stunt. The assembly secretariat ruled that the baby was a visitor and visitors must sit in the gallery.
Politics isn’t so easy for women and mothers especially in Japan. Megumi Kaneko, who was vice minister of internal affairs at the time, was sharply criticized earlier this year when tabloid papers reported that she was taking her 1-year-old son to day care in her official vehicle. Despite the fact that the day-care center was in the same building as her Diet office.

Newspapers accused her of using an official vehicle for private purposes.

Kaneko apologized yet lost her seat in the last election.

Ogata has at least succeeded in raising awareness about mothers in politics.
She is determined to make Japanese society change to accommodate working mothers.