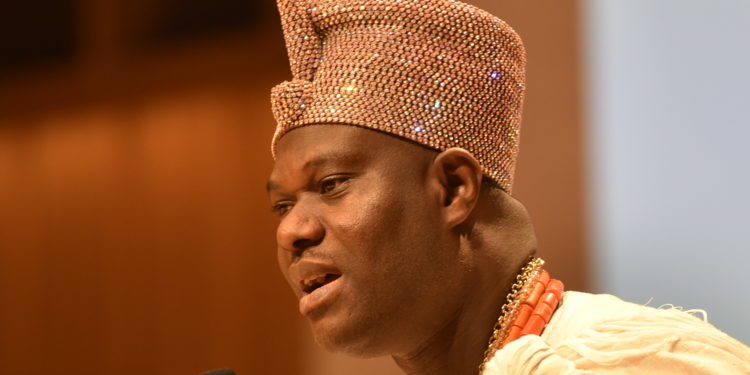 His Imperial Majesty, King Adeyeye Enitan Ogunwusi, the Ooni of Ile-Ife, has visited Birmingham City University today (Friday 24 November) as he seeks to strengthen ties between the UK institution and the more than 40 million people he represents in Africa.

He is the 51st Ooni of the Yoruba people – most of whom live in Nigeria – and was selected from 21 contenders to the throne in 2015.

Accompanied with his entourage, the Ooni’s visit provided an opportunity to celebrate the achievements of around 1,000 graduates from the University who live in Nigeria and who hold eminent positions in fields as diverse as banking and finance, higher education and government.

“It’s an honour to be in front of all of you, and particularly to be here at Birmingham City University.

“Most importantly I want to thank the Vice-Chancellor for taking his time to welcome all of us to this beautiful University. It’s a great honour and we will not forget what you have done today.

“We are proud to be associated with this University and to be in the thoughts and feelings of your students who are potential leaders of our great country of Nigeria and the entire black race.”

He also spoke of the historic significance of Africa and appealed for global unity.

“We belong to one big happy family and that’s what we should preach.”

The Ooni’s visit was hosted in Birmingham City University’s new £57 million Royal Birmingham Conservatoire, where His Imperial Majesty addressed a gathered crowd in the building’s Concert Hall. Prior to this, Vice Lord-Lieutenant Dr Beverly Lindsay welcomed the Ooni on behalf of Her Majesty The Queen, who also granted the Conservatoire its Royal title in September this year.

Speeches were also given by Oluwadamilola Adebambo, President of the Nigerian Society at Birmingham City University Students’ Union (BCSU) and Akin Babasanya, University alumnus and President of the Yoruba Descendants in the Midlands. It is thought there are almost 100,000 Yoruba people currently living in the UK.

“We welcome over 24,000 students from around 80 countries and our Nigerian scholars are integral to our diversity and success going forward. Today’s visit by His Imperial Majesty is a chance for us to reflect on our collective past, present and future, and celebrate the success of our Nigerian students, both here and in their home country.

“I hope today will mark the beginning of even more fruitful partnerships between Birmingham City University and Nigeria, and the Yoruba people in particular.”

Following his speech, the Vice-Chancellor announced, in the Ooni’s honour, that a series of partial scholarships would be made available to prospective Yoruba students commencing their studies in 2018 at Birmingham City University. The scholarship, based on merit, was further marked by the exchange of a commemorative plate from the Vice-Chancellor to His Imperial Majesty.

The event in Birmingham concluded with a performance from a Nigerian student at the Royal Birmingham Conservatoire. Classical singer John Eclou from Edo State was accompanied by postgraduate Stefanos Politsakis from Greece on the piano and received a standing ovation from the gathered crowd. Gifts were also exchanged on the stage before a lunch comprising of traditional English and Nigerian cuisines was served.

In Birmingham itself, the University is mid-way through a £260 million investment programme, including a major expansion of its City Centre Campus, together with the ongoing development of existing sites. 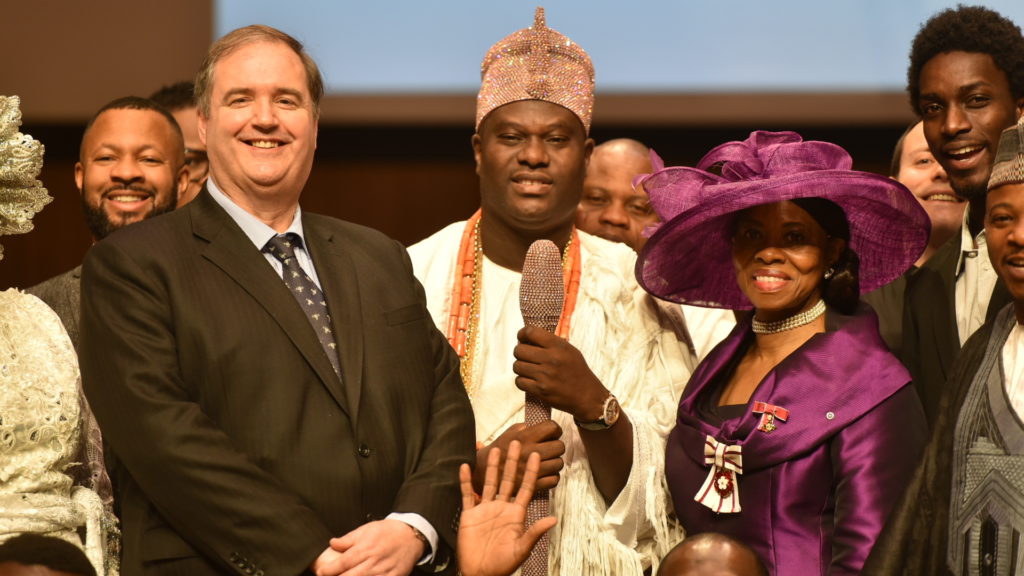 On Saturday 25 November, the Ooni will attend The Phoenix Newspaper 7th Gala Dinner and Awards Presentation at the International Convention Centre in the city, as well as meet with Andy Street, Mayor of the West Midlands; Councillor Anne Underwood, Lord Mayor of Birmingham; and the European and International Affairs team at Birmingham City Council.

With further assistance from the Birmingham Commonwealth Association, the Ooni will also visit the Bullring shopping centre and the city’s annual Frankfurt Christmas Market – the largest authentic German Christmas market outside of Germany or Austria.

The Ooni hopes his time in Birmingham will help to forge a long lasting partnership between the Kingdom of Ile-Ife and the British city across business, cultural exchange, education and investments.