A black student at the University of Hartford has revealed that she was poisoned repeatedly by her roommate until she moved out.

Chennel “Jazzy“ Rowe was a freshman roommate of Brianna Brochu, and while the two didn’t get along, Jazzy assumed that was all to it.

Unknown to her, Brochu had been poisoning her all along.

Jazzy in a video shared on Facebook, revealed the shocking details, the poisonings that gave her a throat infection over and over.

I’m spending my own money that my parents give me for food and groceries, the health centre on campus is not free – in fact they’re expensive.”

Jazzy explained that the tests came out negative, and the campus doctor prescribed antibiotics for the bacteria in her throat.

Because of the constant disrespect, like Brochu turning out the light while she worked, Jazzy decided to move out.

She was moving her things out when friends stopped her and told her she had to see something. What they showed her was an Instagram post.

“Finally did it yo girl got rid of her roommate!! After 1 1/12 month of spitting in her coconut oil, putting moldy clam dip in her lotions, rubbing used tampons on her backpack, putting her toothbrush places where the sun doesn’t shine and so much more I can finally say goodbye Jamaican Barbie.” 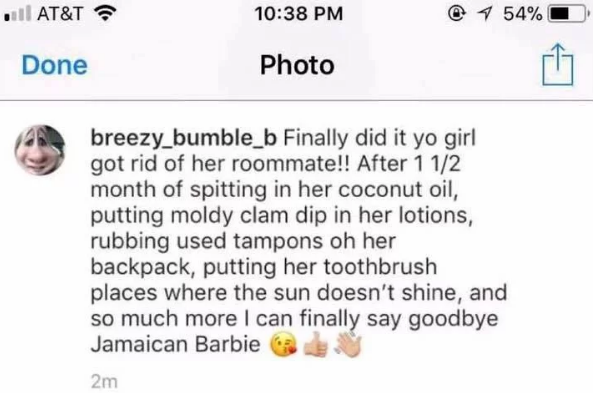 @onlyelimori_ Thank you for bringing this matter to our attention. Please see the attached photo with a University response. pic.twitter.com/dEQNoP69Uk