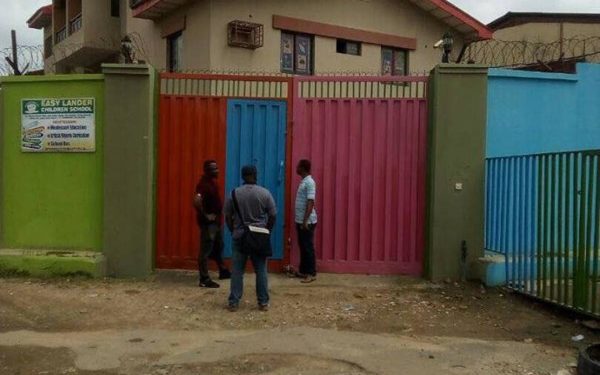 A Facebook user Amanda Chisom shared a story sent to her inbox of a 7-month-old baby who reportedly choked to death at a creche.

According to Chisom, the baby was dropped off at the creche by her mother, who had to get to work somewhere in the area, in Anthony Village.

Maybe 30 minutes after dropping her baby off, the mother got a phone call and was informed by the creche teacher that her baby was shivering.

She returned to the creche and found her baby had passed.

Read the story below, and watch videos below:

The incident happened at Ajao estate of recent. A baby of 7months old was registered in the crèche just last September. And the care taker in the crèche suffocated the baby with pap to the point of death

This is how the stories goes. A woman registered her 7months old baby in a crèche called easy landers at 3A Benson Anorue street Ajao estate just last September cos she is currently running her NYSC program in a company here in Lagos. So on that faithful day been 26th of October,she dropped her baby at the school with the so called crèche teacher miss chinemelem from IMO state.just like in the next 30mins she dropped the baby at the school.getting to her office , she got a call from the crèche teacher that her baby was shivering and she was so socked and asked her what happened and the teacher told her that she was feeding her with pap at some point the baby choked up and started having short breath with pap coming out from her nose and mouth with a terrible shivering.so the mum told her to rush the baby to the near by hospital at faith city at Ajao that she is coming. On getting there the baby was already dead.

Meanwhile, 2days before the incident, the baby’s mum confronted the so called teacher miss chinemerem ‘why she doesn’t greet her anytime she came to drop her baby to school, even when she greet her she won’t answer her well. And miss chinemerem answered sarcastically that anytime she comes, that she is always busy. So she just told her that if she has wrong her in anyway that she should pls pardon her. Moreover .since last Thursday that the incident happened, the owner of the school or their teachers haven’t gone to see the parents of the deceased,even to show remorse or for condolence visit.As am talking to u now, the baby’s feeding bottles and bag are still in the school. They r waiting for the parent to come and carry them.