Orezi, Dammy Krane and Tekno in Battle over Hairstyle 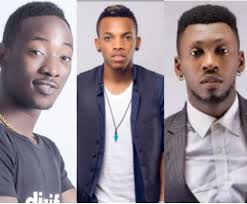 Nigerian musicians Orezi, Dammy Krane and Tekno are currently in an online battle over hairstyle.

The battle started when Dammy Krane posted a video on his Snapchat accusing other artists of copying his style of music and dance moves without giving him credit but get mad when people make their kind of hairstyle.

Orezi who think he was the one being referred to, shared a skit of himself and some other people praying for someone posing as Dammy Krane while the latter’s “Amin” was playing in the background.

Dammy Krane, however, said he was referring to “duck head”.

Tekno on his part posted a video on his Snapchat warning other artists not to copy his new hairstyle.

Could this be a publicity stunt or a battle of hairstyles among the artists?

Watch the videos below;