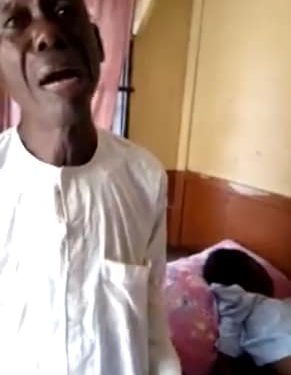 Kogi State civil servant lost his daughter to an illness after being unable to pay her hospital bills.

The civil servant, in a video on Facebook, told his story amidst tears, cradling his dead daughter on an hospital bed.

He hadn’t been paid salaries in the past 10 months, he said, and asked why he did not take the girl to the hospital early enough, the grieving father said he had no money.

This is coming in the wake of another civil servant in Kogi State who committed suicide 10 days after his wife birthed triplets.

54-year-old Edward Soje was a Grade Level 16 Officer in the Kogi State Teaching Service Commission and was being owed 11 months salaries as at the time of his death, Vanguard reports.

His body was found hanging on a tree close to the Maigumeri barracks of the Nigeria army, in the state capital, Lokoja.

Soje had been forced to sell his only car and a 3-bedroom apartment he had been building to relieve his financial burden, his family had said.

He had also withdrawn the sum of N30,000 from his bank account, which was all he had in it, and then written to the bank asking to have his account closed.

He had handed to his wife in a private hospital in Abuja, the N30,000 and returned to Lokoja, where he left a suicide note and hung himself.