Nivea responds to criticism over Billboard with “For visibly fairer skin”

Ghanaian singer Fuse ODG had on Wednesday, in an Instagram post called out to a personal care brand, Nivea an ad campaign promoting a “fairer skin.”

The singer had asked that the billboard featuring ex-beauty queen Omowunmi Akinnifesi with the tagline: “For visibly fairer skin” be pushed down all over Africa or else people would do it for the brand.

However, Nivea in a Facebook post said that they had no intention to “to demean or glorify any person’s needs or preferences in skin care.”

“We respect every consumer’s right to choose products according to their personal preferences,” the brand said, possibly highlighting the fact that some people in this part of the world actually do seek a fairer skin. 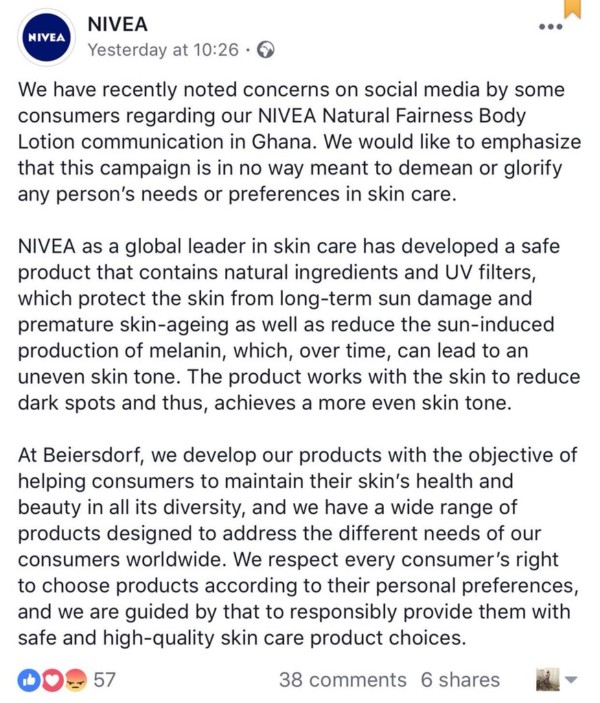 Fuse ODG has also responded to Nivea’s statement stating that the company missed the point of the backlash. The singer said that people do not have a problem with the product Nivea is selling, but the “ideal” that beauty comes in a “fair” or “light” skin.

See his responses to Nivea’s statement below;

So Nivea has replied..Shout out to everyone pushing to get these billboards taken down **Now I need everyone to read my reply CAREFULLY and share** scroll left.. Instagram has a word limit so I had to screenshot my memo. #BlackIsBeautiful #PULLITDOWNNOW Continue to tag your nearest Nivea branch. Scroll left. @nivea_uk @niveausa