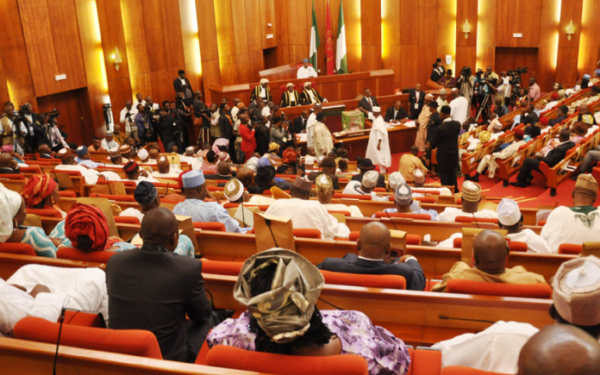 On Tuesday, the Senate condemned the rate of drug abuse in the country and called for urgent steps to arrest the situation.

This followed the adoption of a motion by Senator Baba Garbai (APC-Borno) during plenary.

The “The Need to Check the Rising Menace of Pharmaceutical Drug Abuse among Youths Especially in Northern Nigeria” motion was co-sponsored by 37 other lawmakers.

Presenting the motion, Garbai said that drug abuse, especially cannabis and cocaine, had been a long-term problem among male youths in northern states.

“Codeine cough syrup and other prescriptive drugs have become as termed, ‘the new cancer ravaging women and girls in the North.’”

According to the National Drug Law Enforcement Agency (NDLEA), the North has consistently had the highest number of drug-related arrests in recent years, with 2,205 cases in 2015.

The lawmaker said that abuse of codeine syrup and other controlled drugs currently constituted the greatest challenge faced by youths and drug officers in Northern Nigeria.

He noted that there were several reports about young girls in tertiary institutions in the country who had taken to an alarming abuse of the Codeine cough syrup.

“This problem is destroying even the mothers in homes as they use same codeine and other drugs as an escape from their abusive relationships and invariably get hooked on them,” Garbai said.

In his contribution, Senator Ben Bruce (PDP-Bayelsa) said there was the need for the economy to be fixed to create jobs for the youths currently engaging in wrong activities.

He called on the National Orientation Agency (NOA) to highlight the consequences of drug abuse to help in tackling the menace.

Similarly, Senator Oluremi Tinubu (APC-Lagos) called for the establishment of more rehabilitation centres for drug users across the country.

The motion was unanimously adopted and the senate mandated its Joint Committee on Drugs and Narcotic and Health to bring a legislative framework needed to intervene and combat drug abuse in the country.

It also urged that the National Agency for Food and Drug Administration and Control (NAFDAC) to embark on vigorous sensitization campaign on the dangers of drug abuse and set up rehabilitation programme for people with addiction.

In his remarks, President of the Senate, Bukola Saraki, adopted all the resolutions and referred the matter to the joint committee.