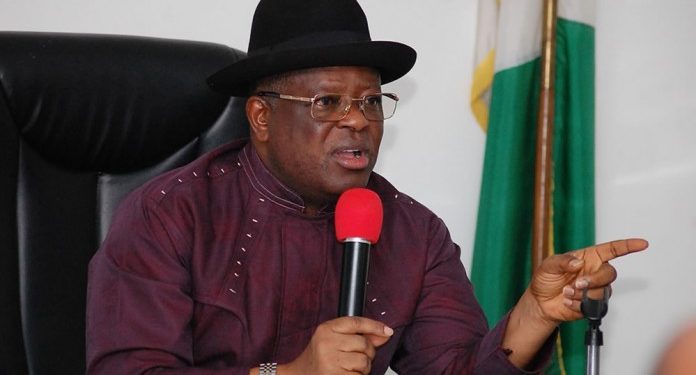 Governor Dave Umahi of Ebonyi State on Friday suspended the headmaster, Augustine Eze and seven other teachers of the state’s Community Primary School for absenteeism.

The governor, who paid an unscheduled visit to the school directed the suspended teachers to report to the Chairman of the local government, Henry Eze.

He further directed that the council chairman should refer them to the Chairman of the state Universal Basic Education,(UBEB) for more disciplinary actions.

He gave N300,000 cash to the 15 teachers present during the visit to change their wardrobe, expressing dissatisfaction with the way they dressed and condemned the nonchalant attitude of some civil servants in the state.

“It is very unfortunate the way and manner some of our civil servants do their jobs without passion. We have called for change in our attitude to and perception of what we refer to as government property. It is absurd that pupils will be in the school and the school headmaster and teachers will brazenly be absent,” he said.

“We shall not take this anymore and the headmaster and the absentee teachers are hereby suspended.

“They are directed to report to the chairman of the local government area who will take them to the UBEB chairman; they must be transferred after serving their suspension,” he added.

“Timaya housed me when EME kicked me ...

Nnamdi Kanu not in Military custody – ...