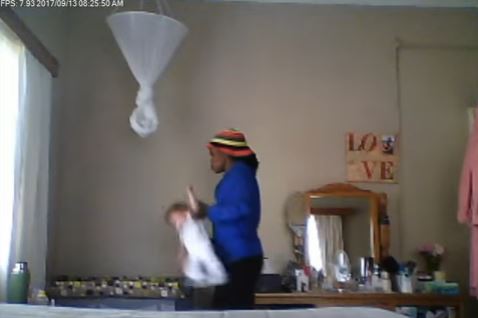 According to New24 reports, the mother of the baby has taken the nanny to court. Theron had suspected something was amiss after noticing bruises and scratches on her baby’s neck. She said:

“After that I sat at work, thinking about my daughter the entire day. That’s when I decided to install cameras, so that I could see what was happening when I’m not at home.”

After fixing the cameras without the nanny’s knowledge, she returned home to watch the footage and was shocked by what she saw.

The nanny was seen throwing the baby into its cot, then later lifting it out with just one leg like a rag doll. Theron said:

“It was very emotional watching it. I refused to sleep, eat or drink for a couple of days afterward. It’s difficult to imagine how long this has been going on for. I can see Laila is so, so broken after everything.”

Theron immediately submitted a report at a police station. She said:

“It was quite a process, as I had to confirm with a mediator what it would mean if I made the recordings without her (the nanny’s) knowledge. The police were initially hesitant about the charges, but wanted to arrest the woman immediately after seeing the footage.

I don’t want her near my child ever again, or to pose a threat to other children. What happened was horrible to witness. I realised Laila has nightmares.

It was comforting to see how many people supported us. Thanks to everyone, family, friends, and strangers, it means a great deal.”

See the camera footage below;