59 IPOB Members Arrested by Police, to be tried as Terrorists 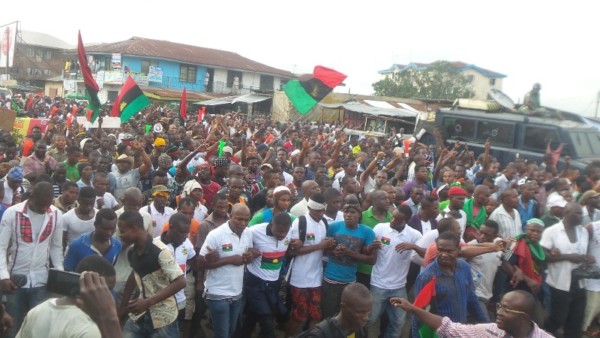 Abia State Police Commissioner Anthony Ogbizi has said 59 members of the Indigenous People of Biafra (IPOB) have been arrested following the military’s declaration of the group as a terrorist organisation.

At a press conference in Ariaria police station in Aba, the police paraded 7 suspected IPOB members, and confirmed the death of a police officer after an attack by the group, Vanguard reports.

Ogbizi said all the suspects will be tried under the anti-terrorism act. He said members of the group must be dealt with, and those seen with items identified with the group will be arrested.

He called on citizens who had information as to the whereabouts of the IPOB leader Nnamdi Kanu to come forward to divulge the information.

He added that the army has recovered several items, including the coat of arms of Biafra, from Nnamdi Kanu’s house. He said:

“As I  am talking to you now, information reaching me  said they have started gathering at Nnamdi Kanu’s house.”

I didn’t convert to Islam because of ...