Insurance in Nigeria: Curse or Blessing 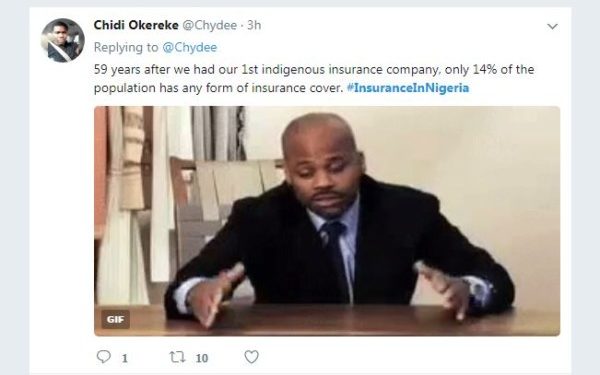 Insurance started by the arrival of British trading companies in Nigeria, these companies facilitated inter regional trade in the country. These foreign companies therefore needed to deal with some of their risks at a social level so these trading companies were given insurance agency licenses by their authorities abroad and this changed the face of insurance in Nigeria.

Insurance is said to be an arrangement  which a company or the state undertakes to provide a guarantee of compensation for specified loss, damage, illness, or death in return for payment of a specified premium.The first insurance agency in Nigeria was from Africa and East trade companies in 1918, THE ROYAL EXCHANGE ASSURANCE. Since then insurance has continued to grow in Nigeria, having about 25 insurance companies at independence  and hundreds today.

Insurance companies have complained that insurance penetration in Nigeria is low compared to acceptance levels in other countries, with claims that this is part of what affects a portion of the total economy. Some individuals have blamed it on lack of enough awareness, individual beliefs, religious beliefs as well as  lack of credibility in the companies.

Truly, asides from the fact that some individuals have beliefs that insurance is like a curse, expecting evil to happen and that only God can insure one and grant assurance for one’s lives and properties another major reason insurance may be experiencing challenges in Nigeria is the fact that often times than not claims are not paid as at when due. Lots of Nigerians have shared their terrible ordeal and experience when it comes to insurance, someone told the story of how he was denied claim of his late wife despite being the next of kin and providing all necessary documents to receive the claim. The company continued to toss him to and fro until eventually  it became clear that they weren’t ready to pay him . He got tired and discouraged. Another individual described how he had been assured that for life assurance after paying premium for a particular period of time you may decide to collect your lump sum of money ,but on deciding to collect his money he was denied, several excuses was given and till today he still hasn’t been paid.

A lot of Nigerians have lost faith in Insurance, despite being aware of its benefits. The fact that insurance companies make you go through hell and discomfort before you get your money if they ever get to pay you claim is enough discouragement. Even in some rare cases you are denied your claim or paid half if the situations surrounding your loss is traced to a fault of yours or if you are accused of not taking proper precautions. A man shared the story of how he was paid half his claim when his car got damaged in an accident because he was accused of being careless.

If insurance Is to gain grounds and really be widely accepted in Nigeria or be introduced to school curriculums in Nigeria like an insurer suggested , insurance companies should not just be interested in collecting premiums, but must step up their game and truly live up to their word.

Anyone who tries to arrest me will ...