Ooni of Ife, Alaafin of Oyo, Kwan 1 others at Unity Cup Grand Finale by Shina Peller 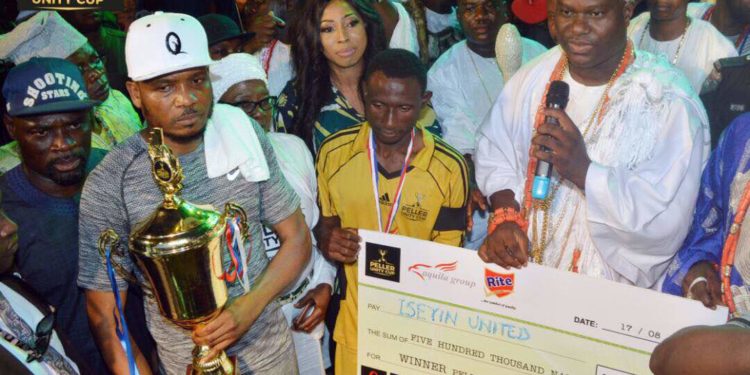 Massive turn out has been recorded at the Grand Finale of the just concluded Peller Unity Cup 2017 as it witnessed the presence of the paramount rulers of the Yoruba Race- Alaafin of Oyo, Oba Lamidi Adeyemi III; and Ooni of Ife, Oba Adeyeye Ogunwusi.

After intense rounds of matches, all road led to the NYSC permanent Orientation camp, Iseyin, Oyo State for the 3rd place match between Irepo United and Saki West Rovers; and the derby final match between Iseyin City and Iseyin United. 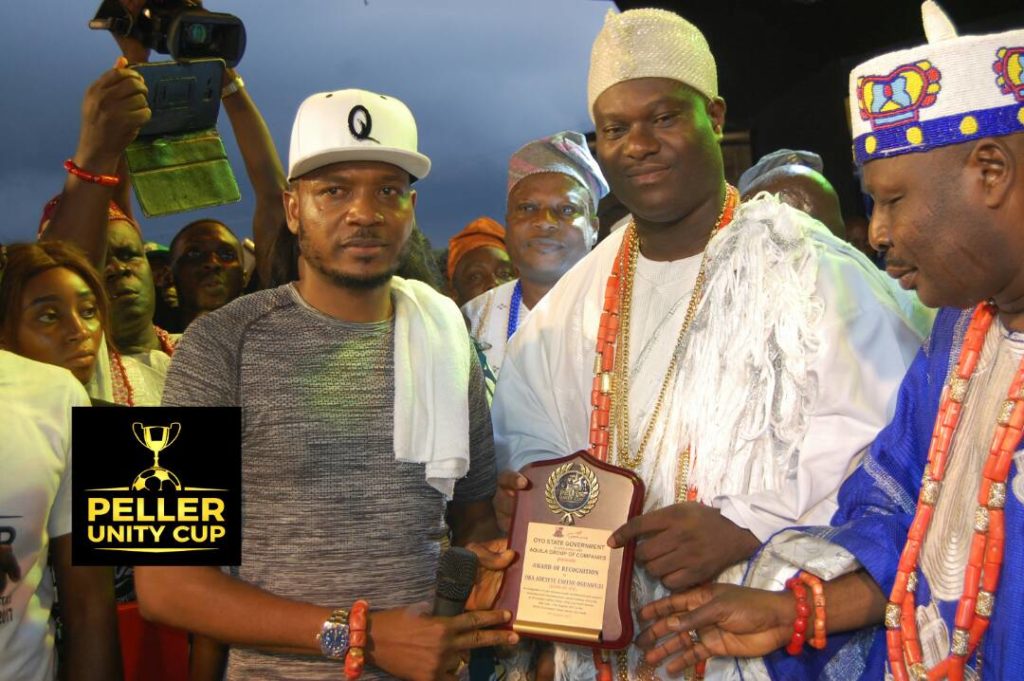 Oba Lamidi Adeyemi and Oba Adeyeye Ogunwusi took the Kick-Off at the final match in company of other Royal Fathers such as: Aseyin of Iseyin- Oba (Dr.) Abdulganiyu Salau, and Ona Onibode of Igboho- Oba AbdulRasheed Jaiyeola; dignitaries from the Oyo State Ministry of Youth and Sports; as well as representatives from the Oyo State Football Association.

The tournament which was part of the events lined up to celebrate the 20th year memorial of the Late Professor Peller according to his son Shina Peller, was designed to empower youths and promote Unity in the Oke-Ogun district of Oyo State in partnership with Oyo State Ministry of Youths and Sports and Oyo state Football Association.

“As much as this tournament is in the memory of my late father, Professor Moshood Abiola Peller, it is noteworthy to know that it was also created to improve the development of grass root football not just in Oke-Ogun but also Oyo state in general. The tournament is nothing political.” Chief Shina Peller added. 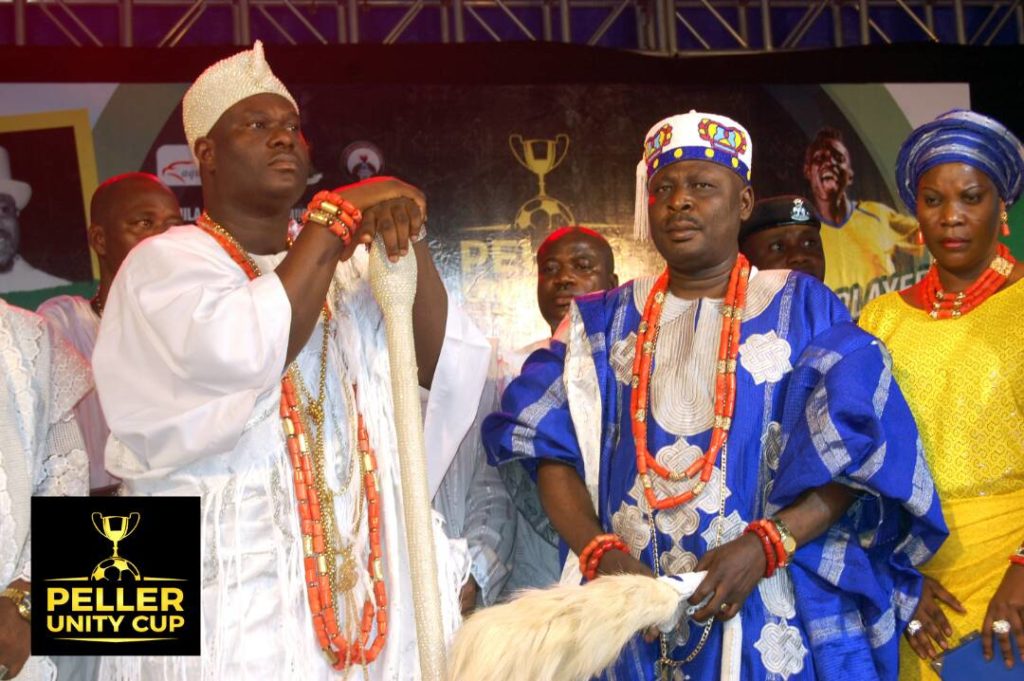 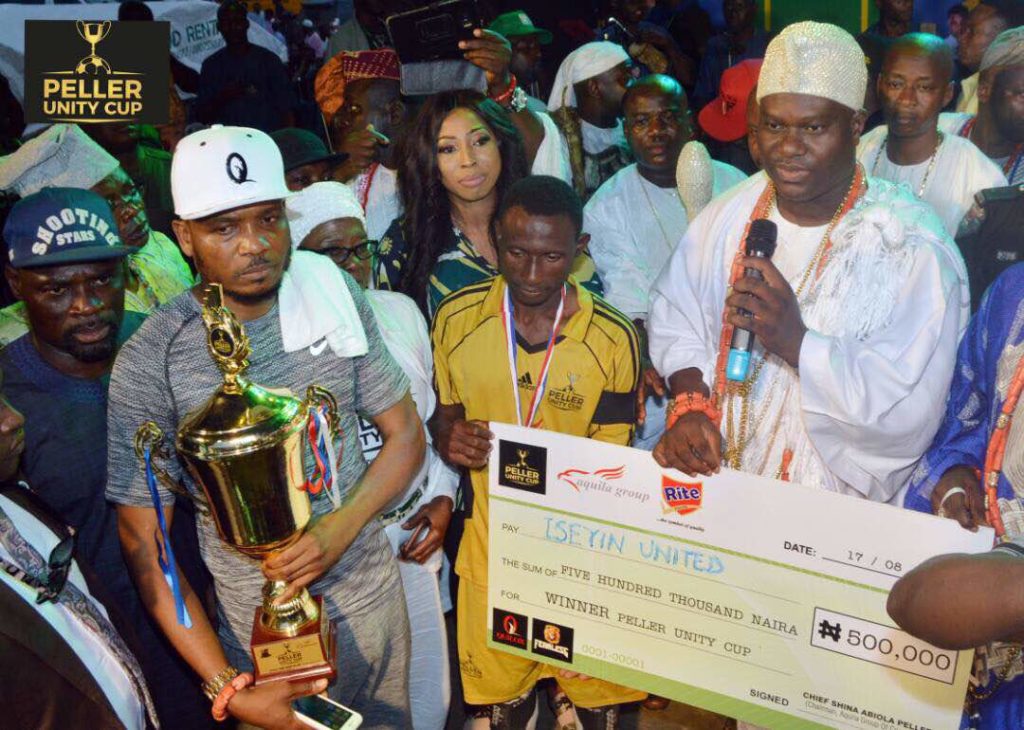 With the attendance of the likes of Davido, and Sound Sultan at the opening ceremony of the tournament in July, attendees trooped out en mass to watch the performances of King of Fuji music, Kwam 1, 9ice, Small Doctor, CDQ, Eniola Badmus, Taye Currency, Skiibi, Terry Apala, Baseone, Juniorboy Que Peller, who were present at the Grand Finale amongst several other thrilling performances.

The matches were nothing short of high intensity as the third place match was decided by Penalties in which Saki West Rovers defeated Irepo United. The Final match was however won by Iseyin United who defeated Iseyin City to lift the trophy.

The highest goal scorer and most valuable player of the tournament are RIDWAN AYAKA (Saki West Rovers) and AZEEZ ADEFABI (Iseyin United) respectively.

Chief Shina Peller, Chairman, Aquila Group of Companies and the chief sponsor of the Peller Unity Cup in his closing remarks thanked all dignitaries present, other corporate sponsor, media partners, and promised to continue to support development in Oke-Ogun and the whole Oyo state.

“Entrepreneurs: Create processes to protect you and ...