Bukola Saraki has refunded pensions paid to him – Kwara Government 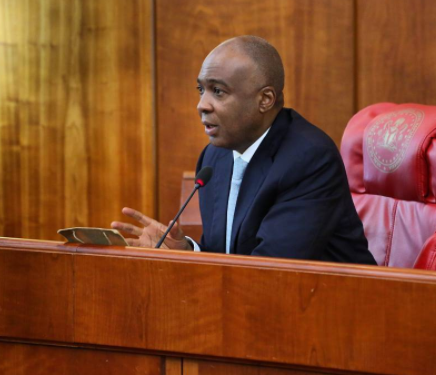 The Kwara State Government has disclosed that its former governor and present Senate President Bukola Saraki no longer receives pension from the state.

According to Punch, this was said in a statement by the Secretary to the Kwara State Government Isiaka Gold.

He added that the pensions already paid to Saraki have been refunded to the state government.

Saraki had in an interview said he no longer receives pension from Kwara State where he was a two-term governor.

Isiaka Gold, in his statement, said as a two term governor, Saraki is entitled to a pension as stipulated by the Third Schedule, Paragraph D (i) of the Governor and Deputy Governor (payment of pension) Law, No. 12 of 2010 of Kwara State.

He said the pensions have been remitted into Saraki’s account, as it is usually done.

He said he received a letter dated August 20, 2015, where Saraki requested that the state stop paying him pension, and the ones already paid be deducted from his account. Gold said:

The government did not only stop the payment of the said pension, the amount already paid into Saraki’s account since he left office was deducted from the money owed to him as well as his other outstanding lawful entitlements.

Asked how much the senate president had refunded, the Kwara State Commissioner for Finance Demola Banu, and the Senior Special Assistant to the Kwara State Governor on Media and Communication Muyideen Akorede said efforts were being made to determine the total amount.

Akorede said: “I am making efforts to get the actual amount from the Secretary to the Kwara State Government, Alhaji Isiaka Gold.”