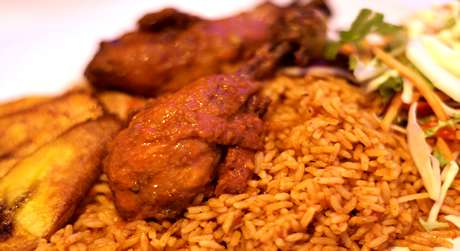 Nigerian cuisines consists of delicious and mouthwatering dishes from the many ethnic groups in Nigeria. Nigerian cuisines typically involve the use of spices and herbs with palm oil or groundnut oil to make varieties of deliciously flavoured foods, often spiced with chilli peppers. However, there are some of our mouth-watering Nigerian foods that actually have foreign origins. Jumia Travel, the leading online travel agency, shares 4 Nigerian foods with foreign origins.

All Nigerians are probably very familiar with the ‘Jollof wars’ by now and though which country’s Jollof rice is the best remains a topic of passionate debate, there is one interesting fact about Jollof rice that might be unknown by many – Jollof rice is actually of foreign origin. The origins of Jollof rice can be traced to the Senegambian region that was ruled by the Jolof empire.

This probably wouldn’t come as a shock to many but Fried rice is another food with foreign origin that has been adopted by Nigerians to become one of the popular Nigerian cuisines. The exact origins of fried rice has actually been lost to history but it is believed to be of Chinese origin, invented sometime within the Sui Dynasty (589 – 618 AD), in the city of Yangzhou in the eastern Jiangsu province.

Over time, this dish has become a beloved dish of many seeking something different from the conventional white rice. Coconut rice is typically prepared by soaking white rice in coconut milk or cooking it with coconut flakes. Though coconut rice is found in many cultures of the world, it is believed to have its origins in the South Asia, Southeast Asia and Latin America regions.