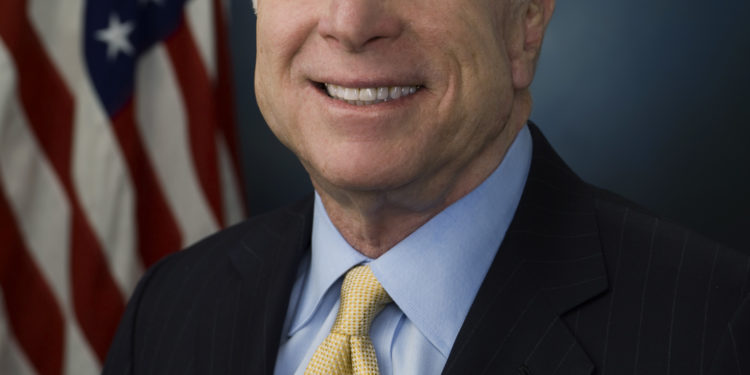 2008 Presidential candidate and US Senator, John McCain has been diagnosed with brain cancer, his office disclosed on Wednesday.

The statement says the senator had visited the hospital to remove a blood clot from above his left eye when a tissue pathology revealed that a brain tumour known as a glioblastoma was associated with the blood clot.

On Friday, July 14, Sen. John McCain underwent a procedure to remove a blood clot from above his left eye at Mayo Clinic Hospital in Phoenix. Subsequent tissue pathology revealed that a primary brain tumor known as a glioblastoma was associated with the blood clot.

Scanning done since the procedure (a minimally invasive craniotomy with an eyebrow incision) shows that the tissue of concern was completely resected by imaging criteria.

The Senator and his family are reviewing further treatment options with his Mayo Clinic care team. Treatment options may include a combination of chemotherapy and radiation.

The Senator’s doctors say he is recovering from his surgery ‘amazingly well’ and his underlying health is excellent.

Glioblastoma is said to be the most common and aggressive form of brain cancer, with survival following diagnosis, according to Current Oncology, usually between  12 – 15 months, with fewer than 3% to 5% of people surviving longer than five years.

Is there something wrong with the name ...