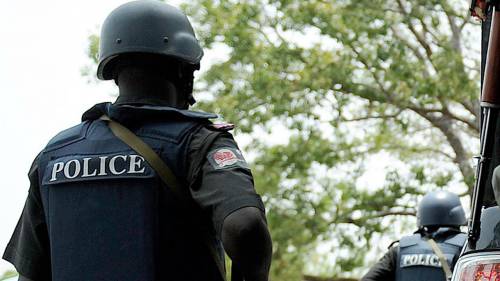 Two commercial banks, Diamond and Sterling were on Wednesday set ablaze, after a policeman attached to the Diamond bank allegedly shot three trailer drivers to death in the Apapa area of Lagos state.

PM News reports that the policeman shot a trailer driver who got into a scuffle with him when he refused to allow him (trailer driver) park in front of the bank since the entire Burma Road had been overtaken by indiscriminate parking by trailer and tanker drivers.

The policeman allegedly shot him and two other trailer drivers who intervened and they all died at the scene.

He later retreated into the bank. When the other trailer drivers demanded that he be brought out, the management refused and they proceeded to set it ablaze. The Sterling bank beside it also caught fire.

PUNCH reports that Policemen from Rapid Response Squad, anti-riot squad and Area B command, as well as operatives from the Nigerian Navy Ship BEECEOFT have been deployed to the scene of the incident.

I rejected Biafra with only the 5 ...