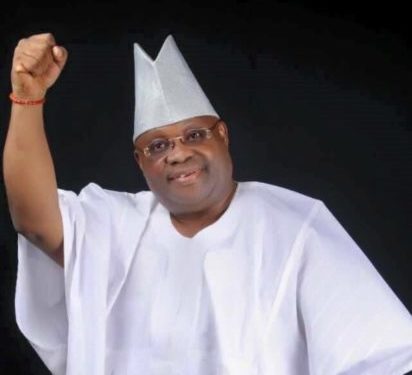 The Independent National Electoral Commission (INEC) on Sunday announced Ademola Adeleke of the PDP as the winner of the Osun West Senatorial bye-election.

The election was  held in 10  local government areas making up the district.

The winner, who is the younger brother of  the late Senator Isiaka Adeleke, had 97, 480 votes to defeat a former senator, Mudashiru Hussein of the APC, who had 66,116 votes,

Announcing the result in Iwo, the Osun West Senatorial headquarters, Baritor Kpagih, INEC Residential Electoral Commissioner for the bye-election, said Adeleke won nine out of the 10  local government areas where the election was held.

He consequently returned Adeleke  as senator to complete the tenure of  the late Adeleke  who died on April 23.

“The victory of our Party, the PDP, at the poll is a general reflection on the reawakening of Nigerians to the deceit of the All Progressive Congress (APC), led administration at all levels, hence, the overwhelming rejection of the APC by the electorates in Osun West.

The people have spoken with one voice and we know that Ademola Adeleke will deliver on his promises to the people.

The successful outcome of this election is an evidence of hard work, dedication and the unity of all members of the PDP in Osun state who buried temporary differences in the overall interest of the party and the good people of Osun state.

Even as we await the judgement of the Supreme Court we urge all our members to unite in the interest of Nigerians to rid the country of the horrible APC government.

Finally, we congratulate the people of Osun West for coming out enmass to vote for our candidate and for their peaceful conduct during the elections.

We also congratulate our members in Osun state for this important victory,” a statement by the faction said.

See the breakdown of the election result as follows:

Adeleke would represent the senatorial district  till 2019 when another election would be conducted.

Although 12 political parties contested  in the bye- election, the two major contenders were the  PDP  and  APC.

Rihanna buys her mother a mansion