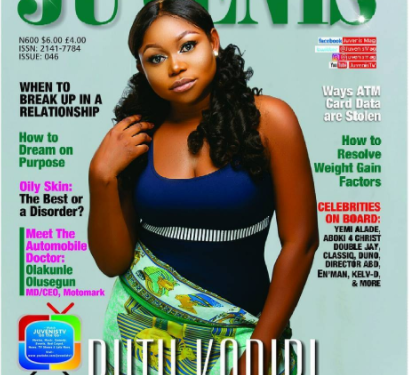 Elegant and sexy looking Ruth Kadiri is the latest cover star for the last issue of Juvenis Magazine.

Ruth is a popular movie actress, screenwriter and film producer who came into limelight in her early age and has been lauded by many movie practitioners and won several awards for her exceptional skills.

Venturing into Nollywood in with her first movie ‘Boys Cot’, she has since then starred in over 50 movies. As a screenwriter, she has written and co-written several movies some of which include: ‘Matters Arising’, ‘Heart of a Fighter’, ‘Ladies Gang’, ‘Sincerity’, ‘First Class’, ‘Over the Edge’ and many more

As a film maker, she has produced films such as ‘Matters Arising’, ‘Over the Edge’, ‘Somebody Lied’, ‘Memory Lane’, ‘Circle of Trust’ and her latest movie ‘Black Men Rock’ starring herself,  John Dumelo, Beverly Osu, Nneka Adams, Toosweet Anan and Tamara Eteimo.

With her latest movie enjoying massive viewership in cinemas across Nigeria, she had a media chat with Juvenis Magazine and now graces the cover of the latest edition of Juvenis Magazine. You can watch the video online by visiting: www.youtube.com/juvenistv1. You can buy online or grab a copy at shopping malls, supermarkets and newsstands. #JuvenisMag #RuthKadiri

10 Best Horror movies of all time