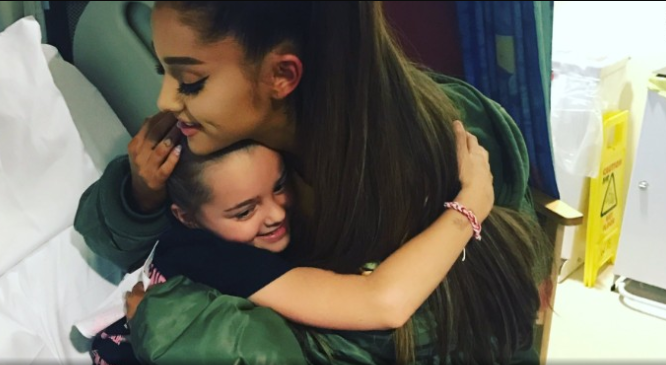 According to BBC News, the star spent time with youngsters at the Royal Manchester Children’s Hospital in a surprise appearance ahead of a benefit concert on Sunday.
Adam Harrison said his daughter Lily “felt like a rock star” after meeting her idol.
Meanwhile, police investigating the Manchester Arena attack, which killed 22 people, have made a further arrest.
A 24-year-old man was arrested in the Rusholme area of the city on Friday night, on suspicion of terrorism offences.
Seventeen people have been arrested in connection with the investigation and 11 men remain in custody for questioning.
Suicide bomber Salman Abedi killed 22 and injured dozens more at the gig, last month.

Grande arrived back in the UK on Friday morning ahead of the One Love concert at Old Trafford cricket ground.

Stars including Justin Bieber, Katy Perry, Coldplay, Take That and Miley Cyrus will join her for the event which is raising funds for victims and their families.

MTV’s Ridiculousness Africa is back with a ...