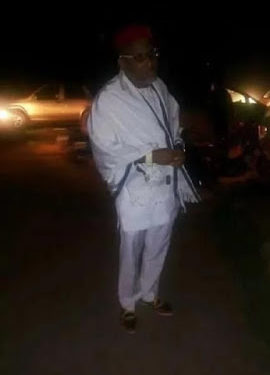 The leader of the Indigenous People of Biafra (IPOB), Nnamdi Kanu, visited the scene where some Biafra agitators were murdered on the 30th of May, 2016 to remember them on the one-year anniversary of the death and also pray for the repose of their souls.

During his visit to Eke Nkpor, the IPOB leader, who only recently got released from prison following his arrest last year, tearfully vowed that the death of those Biafra supporters reportedly killed by Nigerian security operatives will be avenged. While praying for them, he also promised that Biafra will be restored so that their death will not be in vain.
The visit was ahead of the sit at home being observed in the South-East states in remembrance of all who died in the fight to make Biafra a reality.