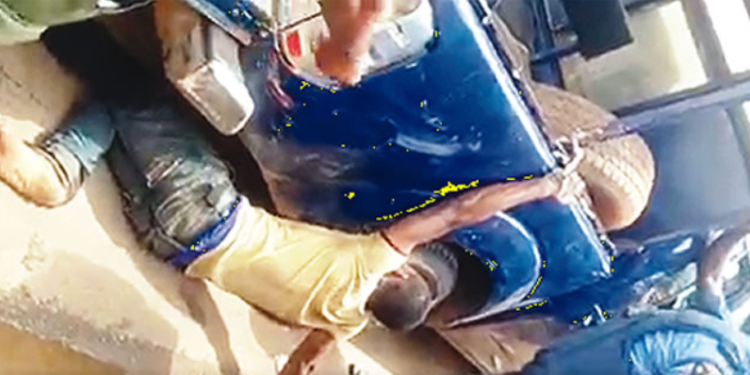 A 38-years-old commerical bus driver, Kester Edun was beaten and handcuffed to a patrol van by police officers for seven hours in Oredo Local Government Area of Edo State.

Kester who was assaulted by the police officers has recounted his ordeal and said he did not commit any offence.

According to PUNCH, Kester said that the officers, who were from Esigie Police Division stopped his vehicle to search him. He said they found nothing incriminating on him.

One of the passengers fled the scene after the officers found a substance suspected to be Indian hemp on the floor.

That was when Kester was arrested and cuffed to the van.

The incident was captured by a resident Augustine Ogbonmwan on his mobile phone.

Kester said it dawned on him that the policemen were after him when they refused to go after the fleeing passenger.

“The security operatives cuffed my hand to their van and dragged me on the road to compel me to admit to being an accomplice to the passenger. I did not have any incriminating thing on the bus.

When the passenger was searched, they found an empty pack of cigarettes in his pocket. Later, the boy ran away. I asked them to run after him, but they ignored me.

They handcuffed me to the vehicle, adding that I must accept that I was the boy’s accomplice.

I told them that I did not know the boy, but they cuffed and dragged me from First (Junction) to Third Junction. The policemen parked and started hitting me and I did not know what happened afterwards because I fainted,” Kester said.

Kester, who was then taken to a private hospital and cuffed to the bed by the officers, said he lost his phone and some money during the assault.

Kester was later detained in a cell at the State Criminal Investigation and Intelligence Department for allegedly being a cult member, an allegation he denied. The resident who captured the assault was also detained.

They have however, been released.

“I am not a cult member. I did not do anything. They should also return my mobile phone and money. I remit N5,000 to the owner of the seized bus every day,” Kester said.

PUNCH reports that the police officers have been arrested and detained on the order of the Assistant Inspector-General of Police in charge of Zone 5, Abubakar Mohammed.

Mohammed said that the officers, who he refused to disclose their identities, will face orderly room trial

“We wish to state that the victims, one Kester and Austin Ogbonmwan, are in good health and are cooperating in the investigation,” Mohammed added.

The Edo state government has also condemned the incident, describing it as “cruel, inhuman and barbaric.”

“This government resolutely believes that while the law must be rigorously enforced, it must be done within the bounds of decency, civility and legality,” Governor Godwin Obaseki said in a statement bu his Chief Press Secretary John Mayaki on Thursday.