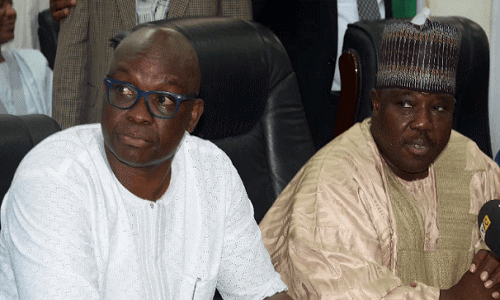 Ekiti state governor, Ayo Fayose, has threatened to leave PDP if the Supreme court rules in favor of factional leader of the party, Ali Modu Sheriff, on May 25th. According to Channels TV, Fayose disclosed this to newsmen Tuesday, May 16th when he reacted to media reports that he had removed the name and logo of PDP from his campaign office and mini signposts mounted on Ado and Ikere-Ekiti roads.

Fayose said that he remains a bona fide member of the PDP until the outcome of the court ruling. PDP has been in a leadership crisis since they lost the election in 2015.

Two of the party members, Ali Modu Sheriff and Ahmed Makarfi have laid claim to the chairmanship position of the party. On February 17th, a Federal High Court sitting in Port Harcourt, ruled that the caretaker committee headed by Senator Ahmed Makarfi was illegal and could not act on behalf of the PDP.

Makarfi approached the Supreme Court to appeal the judgment. The apex court will deliver judgment on May 25th.