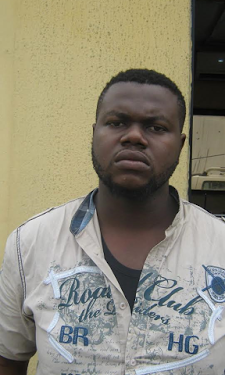 The Economic and Financial Crimes Commission (EFCC) arraigned one Onuoha Danhessy Akachukwu for defrauding an American citizen of $5260.

The suspect before Justice J.K. Omotosho of the Federal High Court, in Port Harcourt, Rivers State on a 6-count charge bordering on Conspiracy and Obtaining Money by False Pretense to the tune of Five Thousand Two Hundred and Sixty American U S Dollars.

Onuoha  is alleged to have used false Facebook accounts to defraud one Maria Jose Alvarez, an American citizen.

Onuoha claimed to be an American Engineer based in the United Kingdom hoodwinked his victims by establishing a romantic relationship which according to him, will lead to marriage.

The defendant pleaded not guilty to the charge when it was read to him. In view of his pleas, the prosecution counsel, R.E.Alao asked the court to fix a date for his trial.

With the defense counsel absence in court, Justice Omotosho adjourned the matter to the 18th day of May, 2017 for hearing and ordered that the defendant be remanded in prison custody.