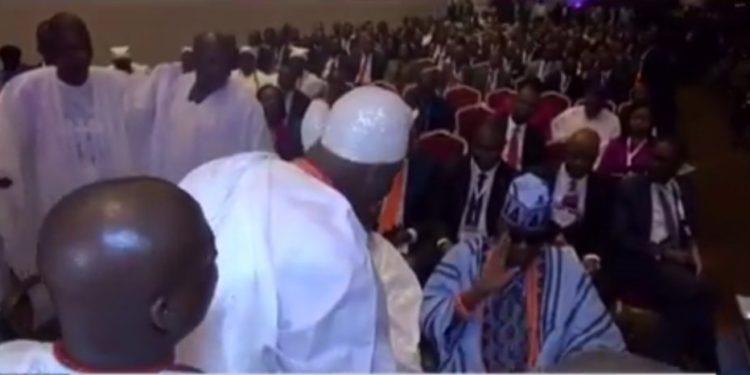 Following the incident that happened between the Oba of Lagos, His Highness Oba Rilwan Akiolu is clearly not feigning love for the Ooni of Ife, Oba Adeyeye Enitan Ogunwusi II. The monarch of Lagos was caught on camera waving off the Ooni of Ife as he tried to greet him at an event.

According to an exclusive report by Sabinews, the reason why the Oba of Lagos shunned the Ooni of Ife is because of his poor eyesight.

‘Social media has been abuzz with news that the Oba of Lagos, Oba Rilwan Aremu Akiolu, “shunned” the Ooni of Ife, Oba Adeyeye Enitan Ogunwusi II at a recent public gathering. A 25 second video made the rounds all day yesterday.

Sabinews can now authoritatively reveal that the Oba of Lagos did not “shun” nor set out to humiliate the younger Oba who is universally regarded as the pre-eminent Oba in Yoruba land. Infact the Oba of Lagos, Oba Rilwan Aremu Akiolu, may be totally undeserving, it now seems, of the vitriol that has been poured his way.

Videos circulating online show the Ooni walk past his reserved seat. He greeted the Obi of Onitsha first, before stooping to greet the older Oba. The Oba of Lagos did not, however, acknowledge the younger Oba who had bowed slightly. Instead he waved at him as he would at a lowly subject. The Ooni did not betray any emotion as he turned and walked back to the seat reserved for him.

Comments on twitter and facebook lambasted the Oba of Lagos for not acknowledging the Ooni of Ife with many calling him names and pointing out the seniority amongst the ranks of Yoruba Obas. Infact, an online report quoted the Ooni’s palace as saying he would continue to respect the Oba of Lagos despite the snub.

Investigations have however, shown that there maybe a deeper reason why the Oba “shunned” the Ooni. The truth, which many have overlooked and which the palace appears unwilling to acknowledge is that the Oba of Lagos is visually impaired and may not have realised who had come to greet him especially as the person seemed to genuflect. To him, anyone bowing for him must be a subject.

An official of the Lagos state government who spoke to sabinews on the condition of anonymity said “have you ever wondered why he always wears dark glasses even indoors? I once saw him leave the seat reserved for him to sit on another man’s lap at a public event. I wonder why the palace has not acknowledged it by now and saved the Oba all the insults on social media.”

With this, it now seems that there may have indeed been no intention on the part of Oba Akiolu to humiliate the Ooni of Ife, just an honest mistake caused by a physical impairment and something a google search could have saved’.

Fashion Blogging, What You Need to Get ...