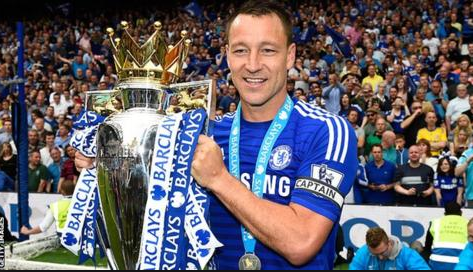 The adventure of John Terry at Chelsea will come to an end at the end of this season, the player and the London club have both confirmed.
According to Premium Times, Chelsea and Terry has made a joint statement confirming that the former England international will bring down the curtain on his playing days at Stamford Bridge next month.
The 36-year-old centre-back has made 713 appearances for Chelsea since his debut in 1998, scoring 66 goals.
‘After 22 years there is so much to say and so many people to thank at this great football club’.

He told the club’s official website. “From coaches, teammates and staff to the fans who have given me so much support down the years, I can’t thank you enough. There will be opportunities for me to speak further about this over the coming weeks.
“I will decide on my future in due course, but for now I am committed to helping the team achieve success this season. The club and I have always had a fantastic relationship, which will continue beyond my playing days. We had some really positive talks but with everything taken into careful consideration I have decided it’s the right time for me to leave.
“I’ve always been conscious that I depart at the right time, in the right way, and I feel that the end of this season is the right time for the club and I. I feel I still have plenty to offer on the pitch but understand that opportunities here at Chelsea will be limited for me. I’m eager to carry on playing and so will be looking to continue with a new challenge. I will of course always be a Blue and am desperate to end my final season as a Chelsea player with more silverware.
“Finally, words cannot describe the love I have for our football club and our amazing Chelsea fans. I would like to thank each and every one of you from the bottom of my heart for the unbelievable support you’ve shown me over the years. You mean the world to me and every trophy we’ve won during my time at the club we’ve won together. I will never forget the incredible journey we’ve been on. Thank you so much for everything.”
Terry, offered a new 12-month deal in May 2016, has been tipped to join clubs in the U.S. Major League Soccer and the Chinese Super League.