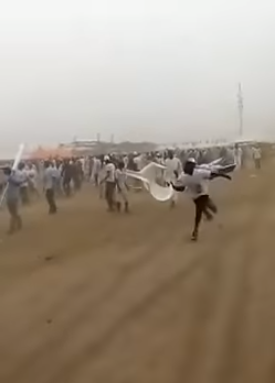 Angry youths in Katsina state on Saturday used stones, shoes, chairs and other objects to attack Senator Abu Ibrahim representing Katsina south and a member representing Bakori/Danja in the house of representatives, Amiru Tukur  at a political event organised by the state chapter of All Progressives Congress (APC).

According to NAN, that it took combined teams of security personnel to rescue notable politicians, including the governor’s entourage, as they came under attack from protesters.

News Agency of Nigeria (NAN) reports say the trouble started when some youths started chanting ‘Bamaso Abu Ibrahim’ (We don’t want Senator Abu Ibrahim) and then started throwing stones and shoes at dignitaries and entertainers invited to perform at the event.

Amiru Tukur, the Representative from the area, suffered an injury while Abu Ibrahim, along with some of his aides and supporters, who were trying to rescue the senator, were also assaulted.