This Young Boy Accidental Shot Himself On Instagram Live

An American teen has died after he accidentally shot himself while his friends watched on Instagram Live, according to local TV station WXIA.

Narrating the incident, his mother Shaniqua Stephens said: “I heard a big boom. I couldn’t tell if it was a gunshot or what.”

Stephens had just watched her 13-year-old son, Malachi Hemphill, take out the trash Monday evening when she heard the gunshot.

She rushed upstairs with her daughter to find her son in a pool of blood. His phone was still streaming on Instagram Live.

“We kicked in the door. We found him just laying there in a pool of blood,” Stephens told the station. “My daughter screamed and said, ‘Mom turn his phone off!’ As I proceeded to look at his phone he was on Instagram Live.” 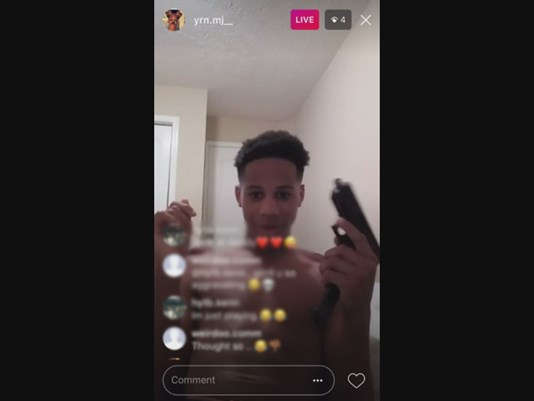 The teen was live on Instagram holding a gun when it suddenly went off. He was rushed to the hospital where he died. “There was about 40 to 50 kids outside,” she said. “I guess these were the kids that were watching on live that live in the area.

I guess when it happened they just ran over here.” Stephens informed WXIA that someone told Malachi to put a clip in the gun during the live video and he obliged. Stephens believes it was an accident and not a suicide.

Detectives are working to find out how Malachi got ahold of the gun.

Stephens is now urging parents to keep a vigilant eye on what their children are doing. “Monitor their phones, just monitor your children,” Stephens said. “More now than anything