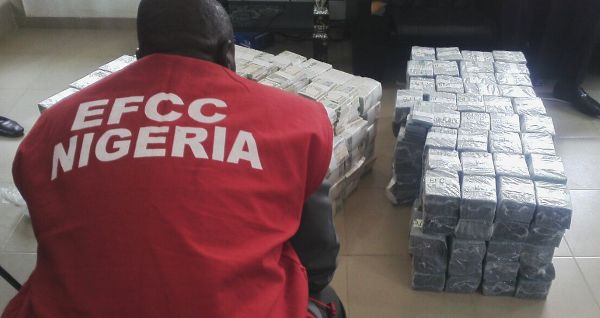 The Economic and Financial Crime Commission has uncovered yet another large sum of suspected laundered money totalling up to 38 million dollar (about 15 billion naira) in a house in Lagos Island. A separate amount of 23 million naira was also discovered.

Operatives of the Commission had been tipped before swooping on the building which report claims is situated at No 16 Osborne Road, Ikoyi.

Just last week, a sum of 4 billion naira was found inside a shop in Victoria Island by the anti-graft agency.

HAPPENING NOW: @officialEFCC counting the discovered stash of millions of Dollars plus Naira found in an Ikoyi apartment. pic.twitter.com/BHjP2kjw5s

OtodoGbame: We Only Went To Pack Debris ...

We Should Cut Down Excess Nudity In ...