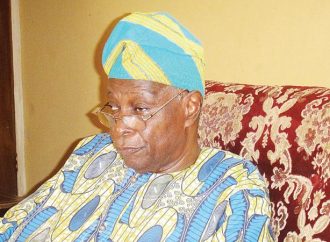 An Ondo State High Court sitting in Akure, has today sentenced seven men who were involved in the kidnap of a national stateman, Chief Olu Falae, to life imprisonment.

The seven men, who were all Fulani herdsmen were found guilty of kidnapping the elder statesman in his farm in Ilado Village, Akure North Local Government Area of the state in September, 2015.

They were initially arraigned on five counts of kidnapping, abduction, aiding and abetting, kidnapping, conspiracy and armed robbery.

The offences were said to be contrary to Sections of the Anti-Kidnapping and Anti-Abduction Law of the Federation of Nigeria, 2004.

It would be recalled that the former Minister for Finance spent three days in the den of the kidnappers while a sum of N5milllion was reportedly paid as ransom to the hoodlums.

It took the intervention of President Muhammadu Buhari who ordered the former Inspector General of Police, Mr. Solomon Arase to rescue the National Chairman of the Social Democratic Party.

In his judgment, the trial judge, Justice Williams Olamide held that the seven accused persons were guilty of the kidnapping charge brought against them by the Ondo State Government.

He said the recovered ransom, call logs, and identification of the suspects by Chief Falae himself, indicted the convicts of complicity in the crime and subsequently sentenced them to Olokuta prison, Akure for life, without an option of a fine.

He however discharged them of two of the counts, conspiracy and armed robbery.

Nigerians Are Hating On TBoss Because They ...