“I Currently Make More Money Than Any Nigerian Singer” – Brymo

Nigerian soul singer, Brymo who has been in several online controversies with fans in the past has claimed that he makes more money from his music than any other Nigerian singer. 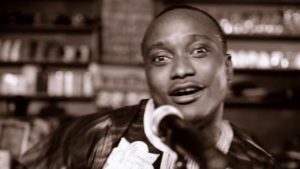 The raspy singer in a recent chat revealed why his album names tend towards the ‘raw’ themes.

When asked about his take on people who assume  he’s not making money like the other hit singers, Brymo said: “Who are the musicians making money? What records are they selling? Where are the sold out gigs? The tours that they are making money from? I make music, and since 2013 my management can account for the business side of everything, and I believe they’re happy.

“We’ve been gigging, I’m sure my manager will argue nobody gigs as much as Brymo in 2016, believe me. I’m not talking free shows. And I’m more than grateful that in an Industry where I was kicked out, I can still work and still earn, and that’s like the most important thing.