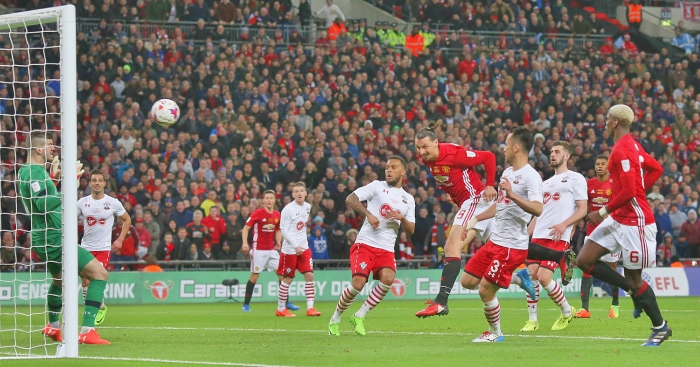 Zlatan Ibrahimovic powered in a late header to win the League Cup for Manchester United on Sunday, sealing a 3-2 victory over Southampton after a two-goal lead was thrown away by Jose Mourinho’s side.

It was Ibrahimovic’s second goal in the final after putting United ahead from a free kick, taking the 35-year-old Swede’s tally to 26 goals in an incredible first season at United.

Asked by a television reporter if something special was unfolding at United, Ibrahimovic replied: “I came. That’s special.”

It was Southampton which had the ball in the net first, though. Gabbiadini beat goalkeeper David de Gea in the 11th minute only for referee Andre Mariner to harshly penalize Ryan Bertrand for being offside when the Southampton defender wasn’t interfering with play.

United’s halftime response was to replace Juan Mata and place Michael Carrick as the shield in front of its defense.

But the Southampton goal threat persisted after the break, with Nathan Redmond’s volley turned wide by De Gea and Claude Puel’s team leveled from the resulting corner. Gabbiadini swiveled past Smalling to strike low into the net to make it five goals in three games since joining from Napoli.

Although Wayne Rooney went up to collect the trophy as captain, that was his only role at Wembley. The 31-year-old forward was forced to watch from the bench as his older teammate produced an ageless, match-winning contribution.

Mourinho became the first manager in United history to win a trophy in his first season.

But it is United now on course for a treble, still in contention for the FA Cup and Europa League.

The biggest target, though, is returning to the Champions League through winning the Europa League or by finishing in the Premier League’s top four. United is currently sixth.

An Interesting Travel Experience Through the Eyes ...