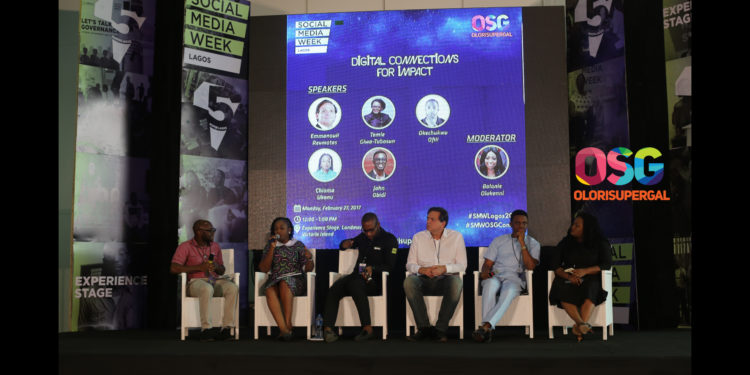 The Social Media Week Lagos kick start today with Olorisupergal hosting a panel of experts in the (social media) industry. Themed “Digital Connection for Impact“, the initiative which was held at the Landmark Event Centre, Victoria Island, was billed to discuss those potentials in digital / social media for growth in our various sectors.

The highlight of the event was the chat session afforded to the panelists to share their individual experience in the social media, and what impact it’d had on their businesses or initiative, plus what the participants / masses can take from these.

The Online Business Coach who is the founder of SmartBCamp discusses his trading in the digital market and most of all, the advantages that lies within. John recounts he only started learning the social media in 2013, not even for commercial purpose, but a mere passion to reach-out to large audience. He said he was taken by how far the medium had projected his popularity so far.

John is of the opinion “Digital Connection for Impact” isn’t just for the IT (type of) people, but everybody. And he sees whichever business lacking digital presence as a disadvantage.

The CEO of  Lifebank  discusses how her cause had  been able to use technology to connect people that needs blood with those who wants to donate, particularly those in dire need of who needs blood for survival.

She lament how people uses social media to bring awareness about a relative who is dire need of blood. What her initiatives does is bridge the gap and create awareness as well as sensitization to reach the privileged people in the other end. So far, her digital /  social media engagement has been able to help source for blood by reaching out to those potential blood donors, thence granting them the pact donate to the cause.

Asked if there’s turn-up  from the Nigerian internet community, Temie affirmed how her initiative had been able to meet-up significantly with their goals: Just within seven months of operation, the Life Bank had been able to acquire up to 3,500 donors to her utmost surprise.

She lauded the rate the initiative has been growing daily, and is optimistic they would reach 5 million donors in no time.

The C00 of Recycle Points firstly explained how Recycle point started in her kitchen which in turn and how digital platforms has helped advocacy for her business.

But then, Mrs Chioma also sent caution to the internet community per their activities online, as the medium can make or break  in spite of  all its tangible potency.

Chioma also seems not a type that likes the vibes on social, but those treasures within.

Is the Director, IT & Mobile Samsung West Africa. Mr Emmanouil discusses how his company had encourage mobile application development in Nigeria.

He put the statistic of people who have access to technology / internet at 70 million people, which he put that 85 percent of Nigerians  access through mobile device. He cited how far his company had been going  about to bring improvement to people’s life through the development of mobile application; in education, health, social life among others.

Is the founder of Okada Books. Ofili recounts how he wasn’t impressed with the general opinion of Nigerians as bunch of people who don’t read. He said asides the fact books are costly, with the spate of (technological) change taken over the world, there would be need to integrate books and its sales into something modern.

He also recounted his experience with people in the rural area who have no access or edge to reach out to potential publishers. Ofili talked up how his initiative had been able to create authors, projeted underprivileged people’s voice to the by and large, as well as how he’s been able to connect them (the rural people) with the right educational resources (sex education, sanitation etc).

An Interesting Travel Experience Through the Eyes ...