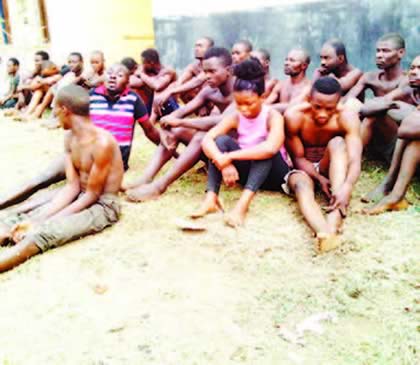 The Police  in Ekiti State have arrested a student of College of Health Technology, Ijero Ekiti, Busayo Kayode.  She allegedly took her bossom friend to be gang-raped by 10 suspected cult members in a bush on the school premises.

The police said Kayode, who is a member of AVE (Act Very Effective) cult, was in charge of recruiting female students of the institution.

According to an anonymous, part of the initiation process is that female students are blindfolded and gang-raped by cult members.

“They are thereafter warned to shut their mouth as initiates or risk losing their lives. But the last victim defied the threat and reported to her parents who informed the police. This led to the arrest of three of the cult members,” he added.

A source in the school said many female students suffered similar fate, but kept their mouths shut to avoid stigmatisation.

Kayode and three of the suspected rapists were paraded on Wednesday by the Commissioner of Police in Ekiti, Wilson Inalegwu.