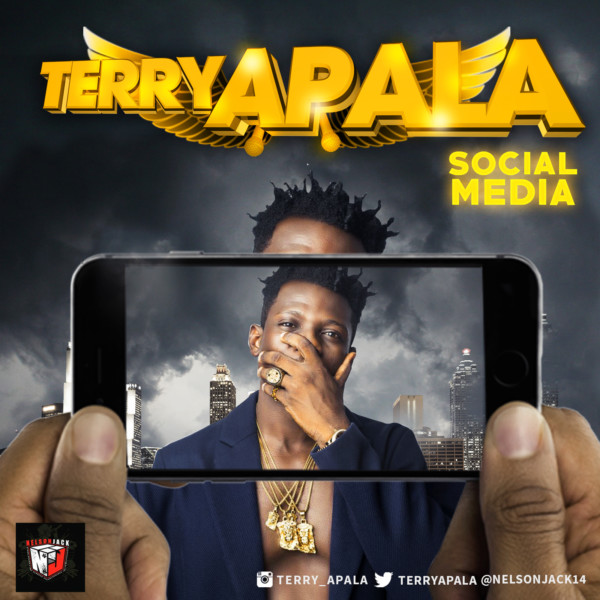 Following his selection as one of MTV Base’s artistes to watch this year, Indigenous Hip Hop Artiste Terry Apala has released his first single of the year, a thumping mid tempo song called ‘Social Media’. In his signature Apala Hip Hop style, Terry sings about the unrealistic portrayal of their lives that social media encourages people to do for public affirmation.

Despite the strong moral message, Terry’s delivery on the Pitch produced track is sure to make it a fan favourite. If this is any indication of what he has in store this year, it is truly going to be the year ‘Two Thousand and Apala’.

Terry Alexandar  Ejeh  ( Terry Apala )  is a recording and performing artiste, singer, and song writer currently signed to Nelson Jack Music. He started off doing music as a child, drumming on empty cans and rhyming to them to entertain his friends at the secondary school in Mushin. Growing up in Ajegunle would also later influence his musical direction. As a pioneer in his generation by making Apala; a possibly more indigenous genre of Fuji music, he has quickly gotten the attention of a lot of people, especially given that he is not Yoruba but rather an Isoko man. This has fuelled fans’ respect and admiration for Terry but he’s also been working at it for a long time.

In 2000, Terry as the lead vocalist of Mezo Soprano led the now disbanded R&B group to victory during the launch of the Kanu Heart Foundation. As a result, the band got to perform alongside Orlando Julius and that was only the beginning. He was inspired growing up by the legendary Apala musician Haruna Ishola, but what’s more exciting is what he has done with it, a blend he calls ‘Apala Hiphop’. It features the tremulous, oscillating voice quality that is the trademark of Apala music, laced over catchy hip hop beats. Hit singles released with this formula include ‘Champagne Shower, ‘Modernize’, ‘Omidan’ and ‘Mo Popular’.

The success of these singles earned Terry various nominations including a much coveted spot in  the ‘Rookie of the year’ category at the 2016 Headies,  ‘Most Promising Act’ to watch at the Nigeria Entertainment Awards, and Indigenous Act of The Year at the Scream Awards, which he won. Terry has also had multiple collaborations with high profile artistes in the industry including Olamide, Reminisce, Phyno, Ice Prince, Falz, Korede Bello, Flavour, Orezi, IllBliss and DJ Jimmy Jatt. As a songwriter, he has also written the sound track for a film produced by Annie Macaulay-Idibia.

VIDEO: Pelepele – How Many Times