I Need Deliverance -Says the Pastor Who Severely Abuse His Kids

The story of the 40-year old pastor who beat his two children so brutally with cable, leaving severe marks all over their body continues to elicit widespread condemnation, as the man at the centre of it all has now been arrested in Jos by the officers of the Nigeria Security and Civil Defence Corps (NSCDC) in collaboration with Social Welfare Department of Jos South Local Government of Plateau State. 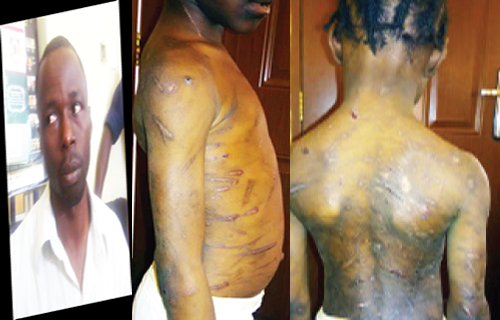 The pastor known as Christopher Sule who has engaged in this bestial act for a period of three year was said to regularly beat his two daughters, ages eight and six, as as a result of their inability to recite what they were taught in school as well as stealing meat from the pot of soup at home due to his excessive anger.

Management of the children’s school had recently noticed several lacerations on their bodies as result of the severe beating over a minor issue and the school quickly reported the incident to the NSCDC in Jos from where the father was apprehended for interrogation.

Wife of the pastor, Mrs Racheal Christopher, 35, had also received a share of the treatment for coming to the rescue of her daughters.

According to Saturday Telegraph in Jos, the mother could not hold back tears as she recounted the constant beating and harassment she and her daughters had endured.

“For the past three years, we have been in bondage and under the yoke of maltreatment by my husband who under slight provocation would descend on me and the children and beat us to pulp.

I had reported the issue to my family but my husband would always ask for forgiveness with a promise not to do so again,” she said.

“My husband was arrested and taken to the local government secretariat; although he had been beating them the last one was so terrible that I had to struggle with him to rescue the children. But I got the beating of my life in the process.

The beating has become so rampant that the people in the neighbourhood no longer intervene,” she claimed. She revealed that she had threatened several times to park out of her matrimonial home along with her children but was often prevailed upon by family members to stay for the sake of the kids and to pray for her husband to turn a new leaf.

She added: “It is like my husband is under a spell or spiritual attack. After my husband carried out this evil act, he always came back, pleading and telling me to pray for him because he did not know what came upon him. We have fasted and prayed together over this issue.”

While speaking Saturday Telegraph on the circumstances leading to his action, Sule said he could not justify his action and confessed that he flogged his daughters more than the offence they committed.

“I don’t know what really came upon me; although I had been beating them that way for the past three years I always regretted my action.

By nature I am temperamental and also have excessive anger, but I need deliverance,” he said. The pastor who couldn’t control his tears, admitted beating his daughters and told Saturday Telegraph in Jos that he flogged them when they could not recollect what they were taught in school and also for stealing meat in the soup.

He pleaded for mercy, promising to love his children.

Meanwhile the Plateau State Coordinator Child right Protection Network Mr Tony Obemeasor has given assurance that the children will be taken to hospital for checkup and treatment for trauma as result of the repeated beatings.