What Happened at One Voice Nigeria Protest in Lagos 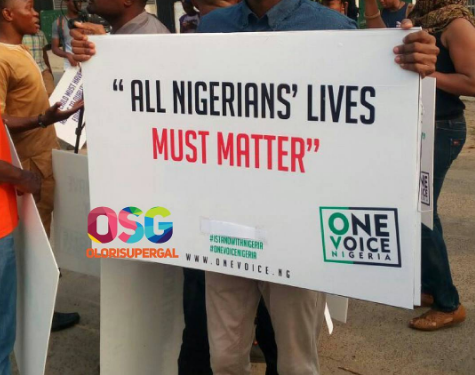 The One Voice Nigeria Protest that 2BABA backed out of over the weekend held today. Participants started trooping in as early as 8am and not only were they carrying placards with different inscriptions about the state of the country but they were also talking to media houses about their frustrations and what they hope to get in the future.

Comedian and Actor Seyi Law spoke about the Protest over the weekend on his instagram page that even though Innocent Idibia AKA 2BABA backed out he would be there, and true to his word he showed up wearing his green jersey and joined the protesters in talking about the economic downturn of the country.

There were undergraduates as well as jobless graduates and also those who have jobs but are just not happy with how the country is going. Some of the grievances of the protesters are the failing health and education sector, the unemployment rate, exchange rate amongst others.

There are lots of Policemen and Military men at the Stadium where the protest is being held to protect the protesters and to keep the protest violent free.

Seyi Law at The One Voice Nigeria protest just like he said he would. #olorisupergal #osg #osglife