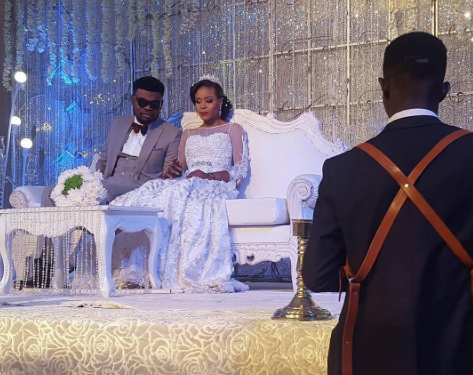 Standout comedian Omobaba has spoken about his friend of 9 years, on the back of their lowkey wedding which was held last December.

Also known as  ‘Fine boy’ because he look more like the opposite,  Olufemi told Punch why he held a lowkey wedding which is quite unusual of Nigerian celebs, how he wasn’t hell bent on pretty girls and other interesting details about his secretly kept relationship.

“I met my wife at an event nine years ago. I saw her; fell in love with her, then decided to approach her. After a pleasant handshake, I told her she would be my wife and that was it. It took me about eight months of talking before she took me seriously because she always believed I was joking, now that we are married, I think I am still joking? It also took me about three years of friendship before it blossomed into a romance,” he said.

“This year, as a married man, my family comes first. I am still the same person I was even though I am now married and nothing has really changed. It is just that you have to be conscious that you cannot travel for about four days. I have to consider the kind of shows I do, I don’t have to be everywhere all the time. I have also begun to watch the people I associate with and know the ones I need to cut off. I did not set out to marry a fine woman; my wife is beautiful both on the inside and outside. It is not only about physical beauty, before a man gets married, he should also consider the character of the lady. Yes, my wife is beautiful but she also has a wonderful character.

“I did not make so much noise about my wedding because by nature, I do not like to make noise about anything I do. In fact, we had got married about a week ago in the church and it was attended by very close friends and family members before we had the other one on Tuesday. We released the pictures we wanted people to see because in this life, people only know what you want them to know. I am a proof that entertainers can keep their private lives to themselves if they really want to,” Omobaba said.