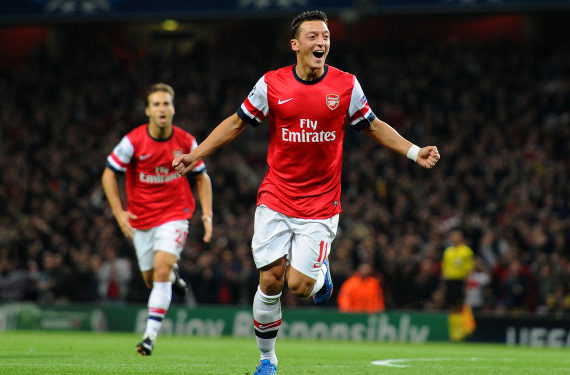 Xherdan Shaqiri won goal of the tournament at Euro 2016 but surely the most extraordinary strike came from Welsh midfielder Robson-Kanu in the quarter-final against Belgium.

The 27-year-old forward, who did not have a club at the time, executed a Cruyf turn in the Belgium box and coolly beat Thibaut Courtois to give Wales a stunning lead and send them on their way to victory over one of the tournament favourites.

This audacious penalty routine from Barcelona stars Lionel Messi and Luis Suarez against Celta Vigo. It “caused uproar and accusations of arrogance and disrespect” in February.

The incident came in the 81st minute of the match, which Barca eventually won 6-1 when Messi lined up the spot kick. Rather than shooting, the Barcelona star rolled the ball to his right for an onrushing Suarez to fire home. Had Messi scored it would have been the 300th goal of his career. Perhaps he thought reaching the landmark with a penalty was too dull.

Europe competition is rarely enjoyable for Arsenal these days and as they contemplate the prospect of a last 16 tie with Bayern Munich in the Champions League next year, here’s a reminder of the kind of agony that seems to be inflicted on them every season.

Having equalised at the Camp Nou Arsenal were faced with the unlikely task of scoring two more goals against Barcelona to make the quarter finals. Enter Luis Suarez who, in the words of The Independent, “scored a truly incredible volley that immediately ranks among the Champions League greats”.

Arsenal’s German midfielder saved the Gunners from another European embarrassment when he scored a late winner against Ludogorets after they had fallen 2-0 behind.

His composure to chip the keeper and then put two defenders on the floor was extraordinary, although it did earn him a reprimand from the usually unflappable Arsene Wenger. “You wanted him to take maybe his chance earlier but at the end he had enough skill to prove that he was right,” said the Frenchman.

The West Ham maestro may not have been at his best for much of this season but he made an impression against Middlesbrough with a fine solo goal, waltzing through the entire Boro defence on his way to goal.

He beat Antonio Barragan, Marten de Roon, Calum Chambers, Ben Gibson and George Friend, before putting the ball past Middlesbrough goalkeeper Valdes. It was “a dribble to drool over”, says the Daily Mail.

Few people would expect a goal of the year contender to emerge from a Spanish Segunda Division B clash between UD Socuellamos and CD Toledo, but 33-year-old striker Javi Gomez came up with a moment of magic for Socuellamos when he scored a sensational overhead kick.

It was a strike to rank alongside classic bicycle kicks from Trevor Sinclair and Zlatan Ibrahimovic.

There are free kicks and then there are outrageous free kicks, and this effort from Mohd Faiz Subri of Penang against Pahang FC in the Malaysian league is very much in the latter category. Unsurprising, then, that it was one of the three goals shortlisted for Fifa’s Puskas award.

It’s easy to see why women’s football is so popular in the US when the goals are of the quality of this one from Christen Press against Costa Rica.

The striker was a late substitute and her goal was the USA’s fifth of the night, but her first touch was worth the admission price alone. Dennis Bergkamp eat your heart out.

The former Spurs and Portsmouth star is now plying his trade with Las Palmas in La Liga. He scored one of the best goals of the year in October, although it was not enough to prevent defeat to Villarreal.

The outrageous assist goes to his team-mate Tana.

David Beckham’s goal from the halfway line against Wimbledon all those years ago was alright, but Hlompho Kekana of South Africa’s 2016 version is even better.

East Fukuoka, playing in Japan’s high-school cup final against Kokugakuin Kugayama came up with possibly the strangest free-kick routine ever in January, involving a “dancing wall”.

The Japanese side “took things to another level with this barmy set-piece”, says The Sun as they went on to triumph 5-0.

Ladies, before you go to bed, remove ...