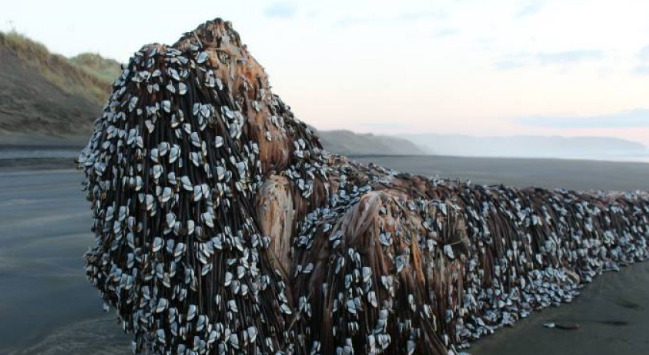 A very large, mysterious, barnacle covered object has washed up on a New Zealand beach leaving people scratching their heads (and slightly scared that monsters are real).

Melissa Doubleday posted the picture in the Muriwai & Waimauku Area Community Group after she made the discovery on Muriwai Beach on Auckland’s west coast.

“Just curious to know if anyone knows what this is??! Washed up on Muriwai Beach,” Doubleday said in the post that attracted a wide array of answers.

People started speculating that it could be anything from a sea monster with dreadlocks, alien pod time capsule or even a ‘rustifarian whale’.

The real answer? “It is just a massive piece of driftwood with gooseneck barnacles attached to it. It is believed to have come from the shoreline of the USA,” Doubleday told The Huffington Post Australia.

Okay, so no alien invasion here folks but you’ve got to admit it would have been absolutely terrifying to come across.