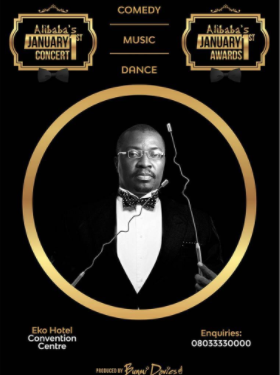 Mavin signed artists Reekado Banks, Akpororo, Bovi, Korede Bello alongside Afro-pop sensation Harry Song, Simi, Waje and a host of others have joined the star-studded line up of artists set to perform at January 1st Concert by Alibaba which is scheduled to hold on the 1st of January, 2017 at EKO Hotel Convention Centre, Victoria Island, Lagos.

The sophomore edition of the annual comedy concert by the highly lauded comedy pioneer was held on January 1st 2016 and witnessed some of the most influential personalities, A-List celebrities and moguls across Nigeria in attendance.

Alibaba who has been in the comedy business for over two decades has promised ‘January 1st Concert 2017’ will be much bigger than the 2016 edition which received favorable comments from attendees and the media.

Produced by the renowned Bunmi Davies, the 2017 edition of the concert will also witness performances from some of Nigeria’s most celebrated comedians, including Omo Baba, Funny Bone, Okey Bakassi, Still Ringing, Ushbebe, Senator, Acapella, Ajebo among others.