Films to see this December 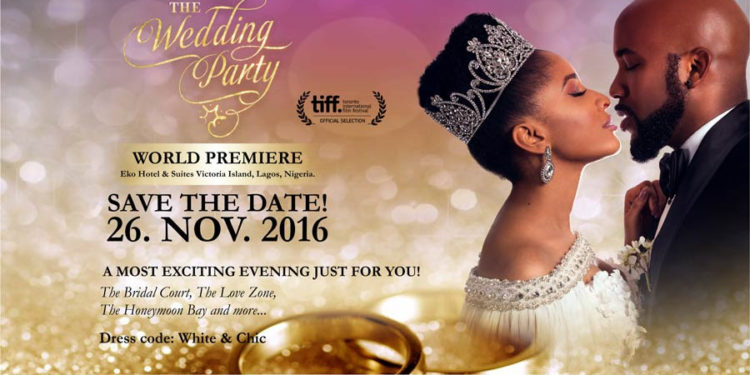 Yes, Nigeria is in recession but here we are still striving and nothing should stop us from enjoying the holidays with our families and loved ones. When 2016 started, movie lovers would agree with me that we were looking forward to so many movies to come out this year. This year alone had Batman Versus Superman, Suicide Squad, Independence Day, Star Wars and so many blockbuster movies. But the year is not over yet, here are some movies to look out for in December:

The much anticipated movie by the ever creative director, Kemi Adetiba would be hitting the cinemas soon and one can only imagine what to expect from the movie. Is it about the hype or the star studded characters in the movie? A film that showcases a typical lavish wedding by Lagosians. Art gallery owner Dunni (Adesua Etomi) is the cherished daughter of Bamidele Coker (Atunyota Akpobome, popularly known as Ali Baba) and his wife, Tunuade (Sola Sobowale). When Dunni and her fianc? Dozie (Banky Wellington) elect to marry, the Cokers decide to throw the wedding of the century. Success in Nigeria’s oil industry has given them new wealth, so why not splash out for their only daughter? Besides, their reputation is at stake. While Dozie’s parents, Felix (Richard Mofe-Damijo) and Obianuju Onwuka (Ireti Doyle), believe their son is marrying beneath him, for the sake of tradition they’re willing to leave the big day to the bride’s parents.

Through a revolutionary technology that unlocks his genetic memories, Callum Lynch (Michael Fassbender) experiences the adventures of his ancestor, Aguilar, in 15th Century Spain. Callum discovers he is descended from a mysterious secret society, the Assassins, and amasses incredible knowledge and skills to take on the oppressive and powerful Templar organization in the present day. Written by 20th Century Fox. The two leads are the Oscar-nominated Michael Fassbender and the Oscar-winning Marion Cotillard. The director is Justin Kurzel, who previously waggled a megaphone in front of the pair for critically-acclaimed Shakespeare adaptation Macbeth. The Wire’s Michael K Williams and newcomer Ariane Labed are also on the cast list, with established character actors Jeremy Irons and Brendan Gleeson joining in October 2015.

A disgraced former surgeon named Stephen Strange (Benedict Cumberbatch) becomes a powerful sorcerer under the tutelage of a mystic known as the Ancient One (Tilda Swinton). Rachel McAdams, Mads Mikkelsen, and Chiwetel Ejiofor co-star in this entry in the Marvel Cinematic Universe. Directed by Scott Derrickson (Sinister). If you are a fan of visual graphics, you will love this movie. It has a good script, nice characters to mention a few plus to the movie. I would advise you not to take your girlfriend if she is not into Marvel movies*winks*

The story is told from two points of view from a young pregnant woman (Rita Dominic), and that of her husband who is a solider (Ramsey Noah). He was accused of involved in the 1976 military coup and assassination of General Murtala Mohammed, the Head of State (Nigeria). If you would aware of the 1976 coup this a movie to watch for some insight as the coup. The director did a very good job with the props, cast and cinematography. I guess that is why it was listed among the movies for TIFF. A must watch!!

Parents need to know that Moana is an animated Disney adventure about a Polynesian island chief’s daughter who sets off on a quest to save her people. With Dwayne “The Rock” Johnson voicing demigod Maui and a score that features original music by Hamilton creator Lin-Manuel Miranda, the movie should appeal to viewers of all ages. Scary, perilous scenes include run-ins with frightening, violent monsters (one made of lava, the other a giant crab) and run-ins with ocean storms and waves. Characters also go up against a ship full of adorable (but armed) coconut pirates, a character dies (off screen), and a couple of male authority figures yell at Moana. There’s also a bit of language along the lines of “butt” and “dumb.” Otherwise, the movie should be fine for younger viewers, offering positive messages of self-discovery and empowerment. And Moana herself is a great role model, demonstrating perseverance, curiosity, and courage. This is a movie for the kids to have some fun during the holidays.

No one should miss the opportunity to see some of these movies and many others during this festive season. Have some fun with your family and folks, we only live life once. Let’s make the best use of it and cherish the moments. Merry Christmas and Happy New Year in advance. Send your reviews of some the movies above at the comment section.
Yours! Akinwamide Nifemi