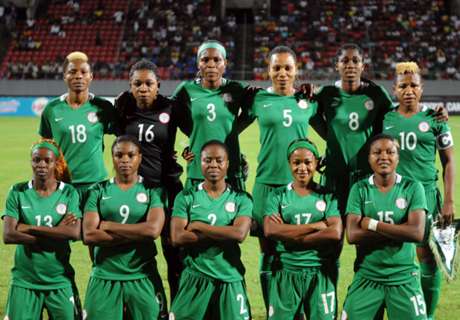 The triumphant Super Falcons who just won the 2016 Women’s Africa Cup Of Nations for the eight time have described the N500,000 given to each of the players by the Nigeria football Federation (NFF) -before their semi-final match against South Africa – as an insult.

The players who spoke to a group of journalists at the pool side of their Agura Hotel lodge yesterday wondered why the Sports Ministry and the NFF should ask them to make do with such token, while their counterparts in the final match ,Cameroon were given massive motivation and support to win the competition.

“Can you imagine that they are asking us to manage the token which they gave us in Cameroon until when they get money? You now wonder when they will get the money, as we have been fed with such stories previously without positive results. This is rubbish and an insult on the entire team . When we qualified for this competition, nobody gave us anything, rather they presented a miserly N10,000 each to us as transport, but we didn’t complain.

“Now we still went ahead to conquer Africa irrespective of our poor preparation and they are here telling us stories.

“Tell Nigerians that we are not leaving this hotel until our match bonuses are paid completely.

“Imagine the kind of motivation that the Cameroon government gave their girls in order to win the cup. I can tell you authoritatively that each of the players were paid money worth N17 million for their semi-final defeat of Ghana and were promised a whopping N22 million each if they could win the trophy.

“But we are here begging the NFF to pay us our match bonuses which is not up to 20,000 dollars each.

“Is it a crime for one to represent her country in sporting events again? They did this to the U-17 and U-20 teams, but they won’t succeed this time as we are bent on collecting every single kobo before leaving this place”, one of the foreign-based players said.