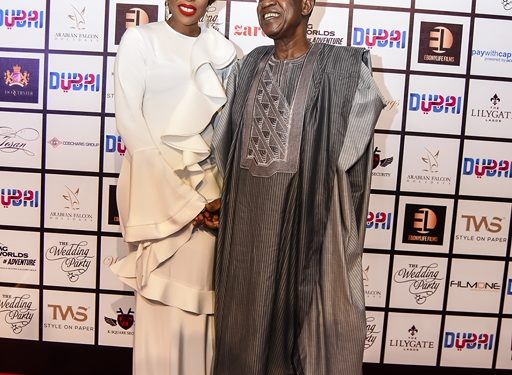 Lagos was brought to a standstill last night, Saturday November 26, 2016, as the Dubai Tourism Grand premiere of the enthralling motion picture, The Wedding Party, and the cast of A-list stars quietened the usually raucous streets of Lagos’s Victoria Island.

Written by playwright Tosin Otudeko and Kemi Adetiba, ‘The Wedding Party’ is an Elfike Film Collective production – a collaboration of Africa’s leading powerhouses – EbonyLife Films, FilmOne Distribution, Inkblot Productions and Koga Studios. It is the first time industry giants will partner on a film project and with TIFF’s recognition is proving that Collectives can grow and prosper the continent’s film community.

Set in Lagos, Nigeria, The Wedding Party is the story of Dunni Coker (Adesua Etomi), a 24 year old art gallery owner and only daughter of her parents about to marry the love of her life, IT entrepreneur Dozie (Banky W). The couple took a vow of chastity and is looking forward to a ground-breaking first night together as a married couple.

The premiere also broke the record for the largest mannequin challenge in Nigeria with an entire theatre posing in tribute of the recent social media phenomenon.