Ondo Election: Strengths and weaknesses of Jegede, Oke and Akeredolu

Admin
0
This is a concise analysis of the current political climate of Ondo State as the Sunshine people head to the poll on Saturday to pick their governor. 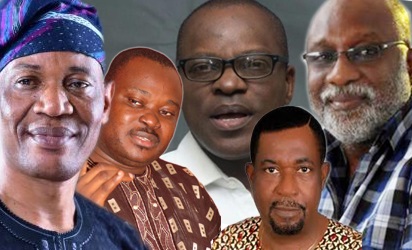 A collage of the pictures of the top contestants

In the next 48 hours, the people of Ondo State will be voting to pick out of 28 candidates, who becomes the occupant of Alagbaka Government House.
The election will not only chart a new course for state politics but also determine, because of the preponderance of other influences, to a large extent, the direction that Nigeria politics may likely take in the march towards 2019.

And due to the unprecedented interests that the election has generated both at local and national turfs, a substantial percentage of the 1.54 million registered voters who hold the franchise for the about 3.5 million population of the state, are expected to exercise their voting rights.

Analysts said the weekend’s exercise, which has raised more dusts than similar governorship polls held after the 2015 general elections, will open new frontiers in the management of party politics and electoral litigations in Nigeria.

Two days to the exercise, the air was still not clear about the final list of candidates to feature in the polls as the much-awaited decision of the courts on the rightful flag-bearer of the Peoples Democratic Party (PDP) between Eyitayo Jegede SAN, and billionaire businessman, Jimoh Ibrahim, has raised tension almost to a boiling point.

Jegede however got a reprieve yesterday afternoon when the Court of Appeal, haven been mandated last Tuesday by the apex court to go ahead with the trial, affirmed his candidacy describing Ibrahim as an “impostor”.

In the All Progressive Congress (APC) which internal politics brought a lot of external influences into the Ondo sphere, a lesser degree of litigation is playing itself out as one of the aspirants, Olusegun Abraham, has dragged the candidate, Rotimi Akeredolu SAN, to court to query the legality of the primary election that produced him.

The controversial shadow election has effectively balkanized the party not only in Ondo where three of the four leading aspirants have ganged up against Akeredolu, but also at the national level where the factors that brought President Muhammadu Buhari into office are being redefined in a way to have far reaching effects on the next presidential election.

The National leader of the APC, Asiwaju Ahmed Tinubu who was in the forefront of the movement that succeeded for the first time in Nigeria’s history, to send an incumbent president packing and install an opposition candidate, has distanced himself from the party and allegedly backing a new horse in the candidacy of Olusola Oke, the flag bearer of the Alliance for Democracy (AD), a platform resuscitated to reinvigorate Yoruba regional politics which has produced a safe haven for the Lagos lord.

With Jegede emerging as the third leg of a tripod of contest, the race is now between him and Oke of AD and Akeredolu of APC.

Olusola Oke of the AD

After falling out with the APC as a result of the controversial primary, Oke, at the prompting of Southwest political leaders, defected to the AD, because it originated from the region and people would easily identify with it.

Across the Southwest, the AD leaders have already rallied around Oke whose acceptability is growing by the day among the grassroots population. And being former PDP National Legal adviser, Oke, who with the late Governor Olusegun Agagu sustained the party before Mimiko joined it just before last year’s election, has a solid support base in the party, which he has also brought to consolidate his soaring popularity.

The lanky politician who hailed from the small fishing settlement of Ilowo in the coastal Ilaje local council, has for years been the face of political leadership in his southern senatorial district where he is expected to garner majority of the votes next Saturday.

The alleged marginalization of the southern district by the incumbent administration, which abandoned most of the developmental projects in the area, will also boost Oke’s chances even though an associate of his, John Ola Mafo, has been picked as the running mate to Jegede.

The AD candidate is also expected to reap maximum gain from a formidable state-wide political structure that he had built since he was the Commissioner on the board of the Niger Delta Development Commission (NDDC) when he extended projects locations to all parts of the state and which he sustained till when he gave a brilliant showing in the 2012 gubernatorial election as a candidate of the PDP and afterwards.

Eyitayo Jegede of the PDP

Although highly burdened by the distractive litigation that saw his name being removed from the candidates’ list before yesterday’s court-ordered reversal, Jegede, also a Senior Advocate is a very popular candidate particularly among the people of Akure where he hails from.

He is expected to give a good showing in the central senatorial district especially with the incumbency factor of his godfather, Mimiko, who characteristically, had been deploying all the weapons in his arsenal to achieve victory.

But like all coins with two sides, Jegede’s relationship with Mimiko, who critics alleged was trying to get a third term through the back door, could be an albatross on the younger politician’s neck.

As an out-going governor that has less than three months to distribute patronage, what he did or did not do in office are now being held against him and many are extending the “wages of the sins” to Jegede, who, until recently had been avoiding politics like a plague.

While he is expected to garner large number of votes in the central district, many electorate in the north and the south, who are averse to a retention of political authority in Mimiko’s central, are already campaigning against him.

Besides, the long-drawn legal battle with Ibrahim has taken a lot of shines out of Jegede’s campaign as many of his supporters have already pitched their tent with either of the two camps of Oke and Akeredolu.

This setback may have been responsible for the strident calls from his camp for a postponement of the election, a call that INEC and other stakeholders have rejected, to allow for a resuscitation of a campaign that was abandoned midway.

While he has only hours before the Friday conclusion of campaigns to cover lost grounds, the saying that “24 hours is a long time in politics”, could give his team the needed vigor to get back to the top.

For many party faithful, the Akeredolu candidature is the best thing to happen to the state, especially when they reflect on the governance records of the incumbent.

Those who share this view always refer to his stewardship as the President of the Nigeria Bar Association (NBA) and his roles in pursuing election petitions for the defunct Action Congress of Nigeria (ACN).
But the APC primary election in which “padded delegates list” was alleged to have been used, is still an albatross on his neck while the roles northern political leaders played in the process has already created an image crisis for him.

It is alleged that he has joined forces with those calling for the head Tinubu, his benefactor who despite opposition in 2012, imposed him as the candidate of the ACN.

Many politicians in the Southwest are already viewing the roles allegedly being played by some northern governors and Tinubu’s estranged associates led by former Ekiti governor, Kayode Fayemi and Ogun governor, Ibikunle Amosun, to foist northern interests on Ondo, with disgust.

Akeredolu however has his strength in Owo where he is expected to garner majority of the votes although he has many well-known politicians as his allies across the state, a fact that had been proved by Mimiko’s trial with his former Labour Part (LP) platform as not enough to secure victory.

The Senior Advocate is however seen as someone who could raise the bar of development in the state because being a professional in politics; he would not be encumbered by political considerations that have allegedly bogged down Mimiko’s administration.

A breakdown into senatorial districts of the 1,546,081 of registered voters shows that Ondo Central has 615,157, which represents 39:78 percent; Ondo North 418,926, which accounts for 27.10 percent and Ondo South 511,998 representing 33.12 percent. But the political space of Ondo State has been reconfigured among the three leading parties.

First, the people of Akoko may eventually cast a protest vote against APC especially as Abraham and Senator Ajayi Boroffice who contested the party’s primary election, have openly campaigned against Akeredolu.

There are six local government areas in Ondo North which has 418,926 registered voters representing 27.1 percent. Of the six councils, Akoko zone alone, where Abraham and Boroffice come from, has four. Also, Owo zone, which is Akeredolu’s political base, has just two.

Oke picked his running mate, Gani Dauda from Akoko, whose people still believe, were politically raped with the APC refusal to implement the report of its own appeal committee.

With 615, 157 registered voters representing 39.78 percent, Ondo Central is the stronghold of the PDP and Mimiko’s political base and with Jegede back in the saddle, the factor of Akure in Ondo politics may be more pronounced even though the metropolis is inhabited mainly by non-indigenes.

Since the creation of the state in 1976, Akure has not produced an elected governor and Jegede’s candidacy offered them much hope. Like the case of Akoko, the people of Akure may cast protest votes against the APC because it is largely believed that federal might was used to cause the initial displacement of Jegede, whom they believe, would be the first son of Akure to be an elected governor. Akure zone, which comprise Akure North and Akure South, has 302, 888 registered voters, almost half of the voting strength of Ondo North.

In the South, Oke remains a force to contend with even though it is also the district where Akeredolu picked his running mate, Agboola Ajayi. But the choice of Ajayi has generated disapproval even among party faithful because he is Akeredolu’s maternal cousin.

With 511,998 registered voters, which represents 33.12 percent of the state’s voting strength. Oke still holds the ace in the south but the dichotomy in the peculiar politics of Ilaje among the Ugbos of Constituency 1 to which Oke belongs and Mahin/Aheri/Etikan of Constituency 2, to which Mafo belongs, may have some negative effects for the AD candidate

Culled from the Guardian