Obaseki Takes over in Edo, Promises 200,000 Jobs in Four Years 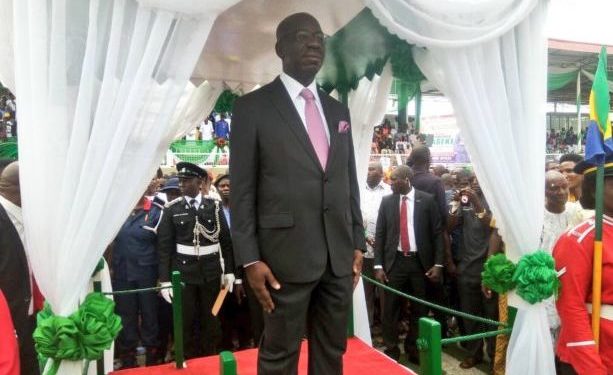 The new governor of Edo, Mr Godwin Obaseki, took the oath of office today, Saturday at the Samuel Ogbemudia Stadium in Benin.

After taking the oath of office administered by the Chief Judge of Edo state, Justice Cromwell Idahosa, the governor promised to fulfil his campaign promise of creating 200,000 jobs in the state within the next four years.

The new governor extolled the achievements of former governor Adams Oshiomhole. He added that: “I’m honored to be succeeding a true friend and I will always uphold your trust. I will resolve to build your legacy.”

Others are Gov. Mohammed Abubakar of Bauchi State and the APC governorship candidate in Ondo State, Rotimi Akeredolu.

The ceremony also had in attendance a former military head of state, Dr Yakubu Gowon, and ministers including that of Information, Alhaji Lai Mohammed.

The inauguration ceremony was also graced by traditional rulers from across the three senatorial districts of the state as well as youths and market women who were all dressed in different attires.

Obaseki is taking over from Adams Oshiomhole who had served two terms of four years.

Obaseki defeated the candidate of the PDP, Mr Osagie Ize-Iyamu, in the Sept. 28 governorship poll in the state.