Miley Cyrus breaks down in tears over Trump winning the election

Admin
0
In a Facebook Live post shared Wednesday morning, Miley Cyrus opened up in a raw, tearful message about her post-election state of mind, and what comes next.
Miley Cyrus also made a tearful response to Donald Trump‘s emergence as president-elect.

Cyrus shared a video on her Facebook Page on Wednesday.

“So, probably like most people – well, maybe not, because given the result – maybe I really am different and maybe a lot of people that I’m surrounded by think with open minds and open hearts like I do,” she began.

“I still think that, in (Hillary’s) lifetime, she deserves to be the first female president, and that’s what makes me so sad. I wish she had an opportunity because she fought for so long and because I believe her when she says that she loves this country. This is all she’s ever done; she’s given her life to make it better.

Hopefully we adjust and we accept everyone for who they are, and, so, Donald Trump, I accept you. This hurts to say, but I even accept you as President of the United States, and that’s fine, because, now, I want to be a hopeful hippie. I want to be hopeful that you will step in, too,” she added.

Following news of the election results, Lady Gaga, who’s been an outspoken supporter of Hillary Clinton, literally took to the streets in protest — specifically, the street in front of New York City’s Trump Tower — early this morning.

She was photographed outside the building, standing on a sanitation truck and holding a sign that read “Love trumps hate”. 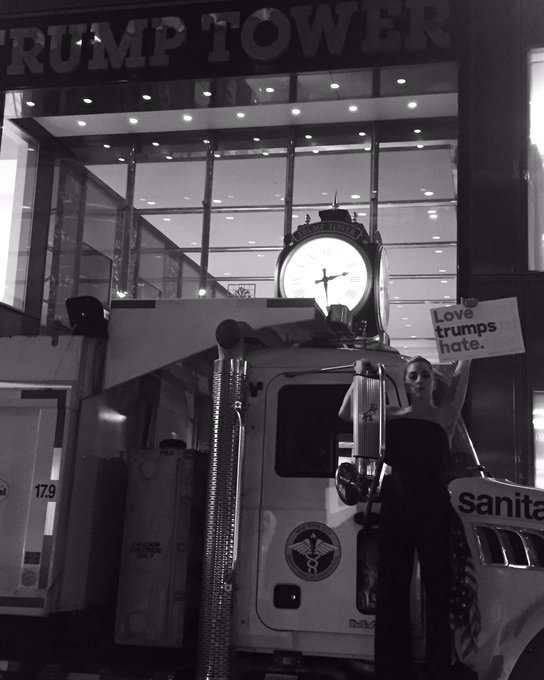 AFRIFF training gets a boost with Canon