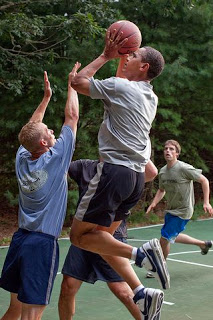 Is the US election a slam dunk? It is for Barack Obama, who early on election day Tuesday took part in a ritual game of basketball as Americans flocked to the polls.

Obama had already cast his ballot before election day, in a bid to drive early registration and voting.

With his civic duty done, Obama left the White House in the early morning as polls to choose his successor began to open.

Wearing dark casual clothing and a baseball cap, he made the short journey across the US capital Washington to Fort McNair.

At 55-years-old and after eight grueling years in the White House, Obama is more likely to be chipping a wedge shot than taking a free throw these days.

In 2010, he needed 12 stitches after “being inadvertently hit with an opposing player’s elbow in the lip while playing basketball with friends and family.