ritish Airways is planning to squeeze an extra 52 seats on its Boeing 777 flights by shrinking seating space, it is claimed.

The airline giant is reportedly trying bring its services “into line” with competitors at Gatwick from 2018.

It also plans to “densify” aircraft at Heathrow after that, it is said.

But from 2018, there will reportedly be 10 seats fitted within the same space. The move would increase the population on board flights by up to a fifth and stretch current facilities further.

The number of toilets is currently 11, allowing for one for every 25 passengers.

The latest move will bring that up to one for every 30 passengers, The Independent claimed.

However, BA says the economy cabin will be fitted with new entertainment systems with bigger screens.

He said the move would allow BA to “lower the average cost per seat, charge a lower price and stimulate demand”.

A British Airways spokesman said: “We are flying more customers than ever before to our expanding network of destinations.

“To meet this demand, we are updating our 777 cabins to bring us into line with many of our competitors and allow us to offer even more low fares. 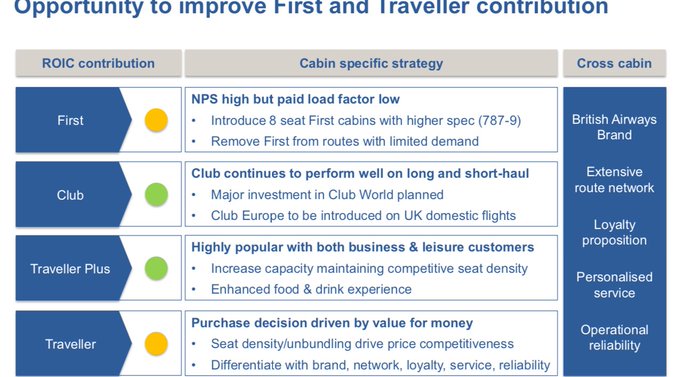 “As part of the update, we will also be fitting new entertainment systems with bigger screens.

“British Airways continues to offer customers a generous hand baggage allowance and complimentary food and drink on all our long-haul services.”

Among the other airlines with a 10-abreast configuration are Air New Zealand, Emirates and Air France.

British Airways will also reportedly add 12 extra seats on its short-haul Airbus A320 from Heathrow -which will increase the planes seating density to match easyJet’s.

The move come after BA increased its seat width from 16.8ins to 17.3 ins on its new Dreamliner fleet last year.

The move followed complaints from travellers, with at least one claiming they did not have enough room to open the cutlery pack with their meal.

However, the firm still hasn’t caught up with some of its rivals.